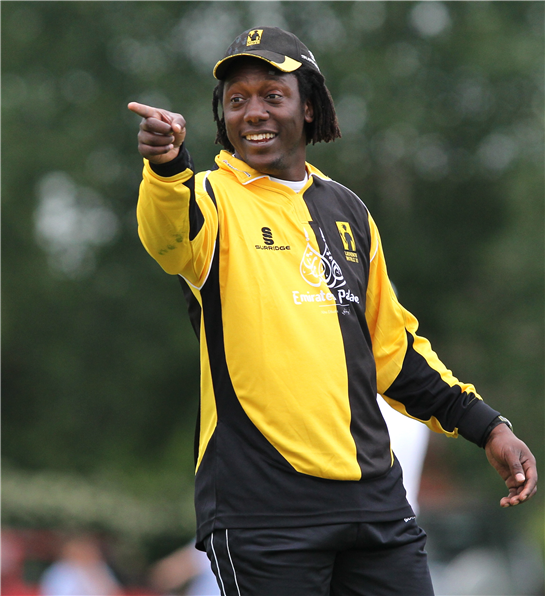 HENRY Olonga, the first black cricketer to play for Zimbabwe, was at Thetford Cricket Club last Saturday to coach under-13s from Thetford and Great Ellingham, and to show off his latest talent – singing.
The 38-year-old put the youngsters through their paces before umpiring a game between the two sides.
After a quick lunch, Olonga returned to take part in a charity game between a Thetford XI and a Specsavers XI, batting for one side and bowling for the other.
Now living in Somerset, he said the visit was a chance to pass on some tips, and spot some potential.
“It’s tremendously rewarding if there’s a kid that has a bit of promise but has something that can be tweaked,” he said.
“I remember having problems with my action when I was coming through and I got advice from some people, Dennis Lillee being one, that helped me enormously, and I owe them a debt.
“Even with just a ten minute session there’s a chance I can give them something to hold on to, and that’s great.”
He said the grassroots level of a club like Thetford was very different from his experience growing up in Zimbabwe.
“It was very elitist and very expensive to play cricket. I was lucky enough to go to a school that allowed me to play and build my career,” he said.
Olonga also switched from modes from pace bowler to performer to showcase his singing talents. He later travelled to St Mary Magdalen Church in Norwich to present an An Evening With event.
Andy Gray, youth coordinator for Thetford Cricket Club, said Olonga’s visit made a real impact with the young players.
“They are really excited about him being here and they all want a picture taken with him.
“I always say that cricket is a great game for children to learn as there’s a lot to do besides turning up, putting on your kit and playing.
“You have everything else to set up, and a tea to prepare and take part in. I think you end up with a much more rounded child from cricket than you might from playing football, where you just turn up and put your boots on,” he said.Advertisement