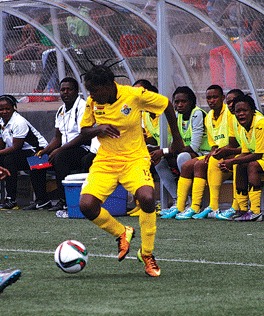 IN A David vs. Goliath matchup, two-time World Cup winners Germany beat the heavy underdogs of Zimbabwe 6-1 on Wednesday afternoon in Sao Paolo.
Zimbabwe attempted to hang with the world heavyweights but Germany dominated and dictated play from the get-go.
The Germans nearly struck in the 6th minute when midfielder Isabel Kerschowski lofted in a cross to Simone Laudehr who’s first time volley struck the outside of the post.
Germany head coach Silvia Neid was forced to make an early substitution in the 19th minute as Laudehr appeared to roll her ankle attempting a cross.
She attempted to shake it off on the sidelines with Germany playing down a player for a couple minutes but she was replaced shortly thereafter by 22-year old Melanie Leupolz.
After a lengthy spell of possession without creating many dangerous scoring opportunities, Germany tallied their first goal in the 22nd minute when a Dzsenifer Marozsan corner kick found the head of midfielder Sara Daebritz.
In the 36th minute, Germany’s aerial ability would prove difficult for the Zimbabwe defense once again. Melanie Leupolz whipped a cross into the box that was perfectly met by forward Alexandra Popp to double the lead for the heavyweights.
On the stroke of halftime, midfielder Melanie Behringer almost made it three goals for the Germans but her left-footed blast from outside the box rang off the post.
In the 50th minute shortly after the halftime break, Zimbabwe would put a scare into the Germans and get on the scoresheet. A Rutendo Makore shot on goal was parried by Almuth Schult to the feet of Kudakwashe Basopo who slammed home the rebound.
However, the one-goal deficit would be short-lived as Melanie Behringer rifled home a free kick in the 53rd minute to give the Germans a 3-1 lead.
As the second half wore on, Germany continued to dominate possession but Zimbabwe held strong. But in the 78th minute, Leupolz was involved in the action again as she was fouled in the box, giving the Germans a penalty kick. Behringer extended the lead to 4-1 as she volleyed home the rebound after her initial effort was denied by Zimbabwe goalie, Lindiwe Magwede.
Germany would make it 5-1 in the 83rd minute when Leupolz controlled a long pass from inside the box and calmly finished past Magwede. It would ultimately end 6-1 when Eunice Chibanda redirected a ball into her own goal off a cross from German subsitute Lara Goessling.Advertisement