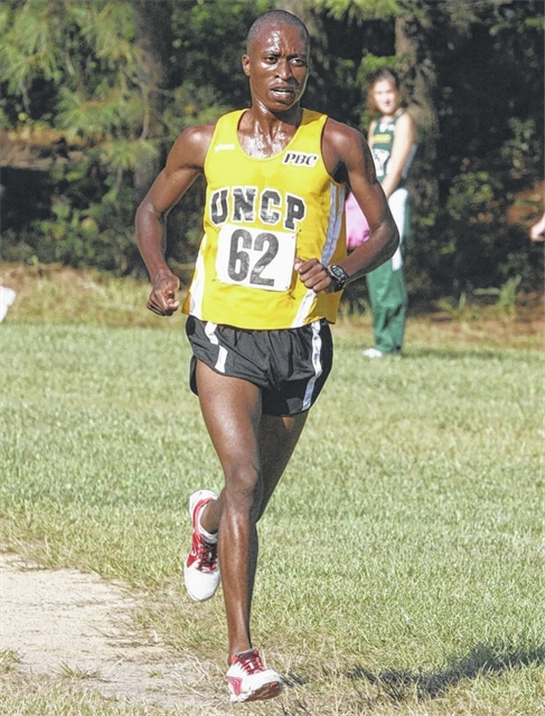 GROWING up in Zimbabwe, Pardon Ndhlovu couldn’t afford a pair of running shoes.
It didn’t stop him from running.
“It was rough,” Ndhlovu said. “But at the same time, there was some hope in my running that I could get a (college) scholarship. It was hard at times, but it made me a little bit better over the years.”
A student at Mabvuku High School, Ndhlovu got his start running with his father and a friend that worked for the local police department.
He was hoping for a Division I scholarship. Instead, Ndhlovu ended up at The University of North Carolina at Pembroke, where he became an All-American for the Braves.
It was in Pembroke where his dream of making the Olympics was birthed.
Now, 28, Ndhlovu will see that dream come to fruition as he heads to Rio to represent his native country at the 2016 Olympic Games — with no worries of being barefoot.
He will compete in the men’s marathon on the morning of Aug. 21 — the final day of competition.
“I will be excited putting on the Zimbabwe colors,” he said. “I made it for myself and all of the people who supported me from Lumberton, to Pembroke and Augusta. We made it.”
In June, the National Athletics Association of Zimbabwe named three athletes to represent the country in the men’s marathon. Ndhlovu will join Olympians Wirimai Juwawo and Cuthbert Nyasango, who competed in the 2012 Olympic Games in London.
“The talk about Olympics, I never told anybody,” Ndhlovu said. “You get scared because you’re at a Division II school and you worry about not being as good as the D-I guys. It was a huge relief when I found out I made it. When I started getting stuff about arrangements and information it started to click that I was actually going to the Olympics. Then the focus shifted from waiting for the news to training and making sure I’m ready to go.”
Ndhlovu posted two Olympic-qualifying times in the past 17 months, dominating the 2015 and 2016 Houston Marathon with a pair of 10th-place finishes. He crossed the line in 2:16.51 in 2015 and 2:17.32 in 2016. Both marks came in under the 2:19 qualifying standard.
Then the waiting game began for Ndhlovu, who was expecting to hear news in April, but ended up having to wait until early June.
“It was a long time,” he said with a laugh. “People would be asking questions and I really didn’t know what to tell them. It was a long road.”Advertisement

Ndhlovu ran cross country and track for the Braves from 2009-12. A four-time all-Peach Belt Conference standout, he won the 2011 and 2012 PBC Championship and was named the PBC Runner of the Year both seasons.
Ndhlovu also competed in PBC track and field in his senior season, becoming the PBC Men’s Track Athlete of the Year that season en route to advancing to the NCAA National Championships, where he was named an All-American in both the 5,000- and 10,000-meter runs.
He was just as impressive as a student at UNCP, earning Capital One Academic All-American honors twice during his career and receiving an NCAA postgraduate scholarship, which allowed him to serve as a graduate assistant coach at Augusta University for two years — where he remains as an assistant coach for cross country and track.
Throughout the process, Ndhlovu said the support from his alma mater has been unwavering.
“It’s hard to get to this stage by yourself,” he said. “The sense of community at UNCP is really amazing and strong. It was amazing to know I wasn’t doing what I was doing by myself. Pembroke was my second home. Everyone made sure I had everything I needed.
“You can really be anything that you want to be, no matter your background. That’s another thing I took away from UNCP. I just had people that believed in me, and it went a long way in getting me where I am today.”
As he prepares for the biggest race of his life, Ndhlovu referred to a marathon as a “race of emotions,” saying it’s important to stay even keel throughout the process.
“It’s the biggest stage and I’ll try to contain myself as much as I can,” he said. “At that point you don’t want to be carried away. You have to be confident in executing.”
As for his goal at the Games, Ndhlovu said he’s aiming for “anything higher than seventh.”
“I just want to be the best I can be,” he said. “Anything is possible.”
Speaking on behalf of Brave Nation, Todd Anderson, UNCP’s associate director of athletics, had high praise for Ndhlovu and the impact he’s had on the Pembroke community.
“Pardon has been such an incredible ambassador for UNC Pembroke, and we are all incredibly proud of everything he has accomplished both inside and outside of the competitive arena,” Anderson said.
“His work ethic and character are unchallenged, and that will remain a constant for years to come.”
And Anderson, like many at UNCP, believes the sky’s the limit for Ndhlovu in Rio.
“It is an incredible accomplishment for Pardon to even qualify to compete in the Olympics,” he said. “But his goals for this event reach much higher than that.
“If the end result is any indication of his work ethic, I would not be surprised at all to see him on the podium at the medal ceremony.”