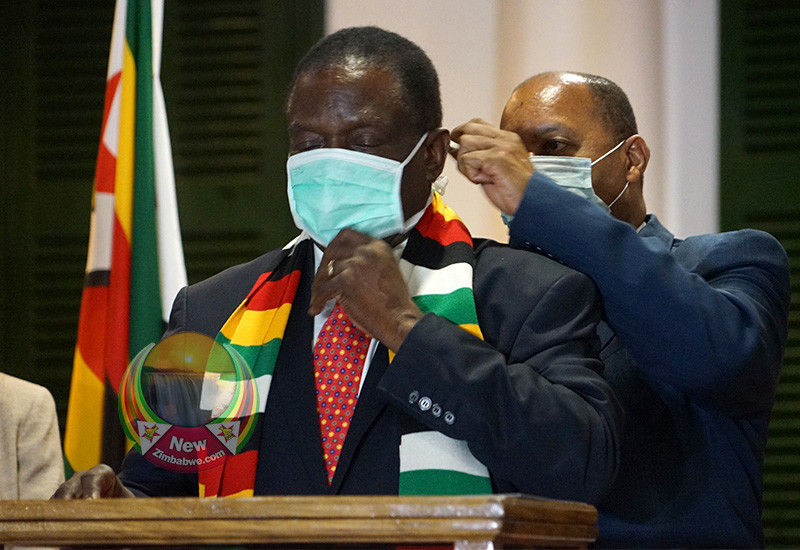 Since the outbreak of the coronavirus, countries across the globe have invested billions of dollars toward efforts to contain the virus, and ultimately find a cure. The budgets and spending are staggering, with some nations digging deep into their reserves to try and keep their economies and health sectors functioning.

It’s been a different story for Zimbabwe though.

Hardly a day passes without President Emmerson Mnangagwa, alongside his two deputies Constantino Chiwenga and Kembo Mohadi, having their photos posted on social media receiving donations from well-wishers.

No matter how small the donation, the three of them always seem to be at hand at the president’s official residence, State House.

State-owned media recently posted a picture of President Mnangagwa and his deputies receiving 10 000 face masks from Timber Care of China. On another occasion, the three were pictured accepting an ambulance worth US$90 000 from a car dealership company.

Zimbabweans are not amused by all this.

Which other country lines up a President, his two deputies and other VVIPs daily to receive donations, asked a former minister in late President Robert Mugabe’s government, Walter Mzembi.

Questions have also been asked on what exactly government has done to fund the fight against the impact of Covid-19 pandemic.

On March 30, Zimbabwe’s Treasury said it had availed Z$500 million and redirected the country’s 2020 capital expenditure budget towards fighting Covid-19. A National Disaster Fund has also been set with a target of at least US$2.2 billion, equal to the country’s 2020 National Budget, using the fixed exchange rate of 25 local dollars for every American dollar.

To some, the photos of President Mnangagwa and his deputies receiving donations is confirmation of how bad things are.

Hit by two consecutive droughts and with what the International Monetary Fund has described as policy “missteps”, Zimbabwe was always going to struggle with the impact of coronavirus.

Policy confusion, corruption and poor economic management has left the country with a huge debt of more than US$9bn – mostly in arrears, which has prevented it from accessing some of the international financial packages other countries can access.

The 2018 to 2020 drought, coupled with controversial land policies, resulted in a poor harvest. This, according to Mnangagwa’s government, has left 7.7 million citizens food insecure.

In a humanitarian appeal made last week, Mnangagwa said a total US$955.6 million is needed as a response to food insecurity in the country.

The United Nations World Food Programme, meanwhile, this week made its own appeal for Zimbabwe and requested for US$130 million, “to sustain through August an emergency operation to prevent millions of the country’s most vulnerable people plunging deeper into hunger”.

The impact of the coronavirus of Zimbabwe is not yet clear, but is expected to be significant, with the Zimbabwe Stock Exchange taking a pre-emptive decision to say all listed entities are now trading under cautionary.

Listed companies were also given a grace period of up to 15 May 2020 before they can disclose the full impact of the coronavirus pandemic and the subsequent 21-day lockdown.

According to a weekly snap survey conducted by representative body the Confederation of Zimbabwe Industries (CZI), production and trading volumes have declined by 36% on average, mainly as a result of reduced workforce, temporary closure of the firms and disrupted supply chains.

“This has affected raw materials supply which is needed to keep industry rolling,” said CZI.

Alex Siyavora, the chief executive of Zimbabwe’s biggest supermarket chain, OK Zimbabwe, said his main worry was to source supplies, as only a few items remain on the shelves after customers stocked up in readiness for the lockdown.

“It would be good for quick recovery to benefit from a stimulus package, but sustainable recovery would come from improved supply of products for sale,” Siyavora said.

While OK Zimbabwe has been allowed to keep its outlets open, it had still closed six in Harare’s central business district where the number of customers under lockdown rules does not justify opening the stores.

People are barred from going to the central business district unless they offer essential services.

His counterpart and Truworths chief executive officer, Themba Ndebele, was not so lucky, as the clothing retailer was forced to temporarily close during the lockdown.

Ndebele is however less concerned about the lockdown period. He is worried about the overall economy where aggregate demand has been waning since 2019.

“Once your demand is not there and people are not going to work, there is nothing you can do about it,” he said.

He said salaries of government workers, who make up the bulk of Truworths’ customers, had not gone up at the same pace as the cost of living.

Zimstats on Wednesday released statistics saying a family of five persons requires Z$5 293 per month to get by. This is at a time the lowest paid government worker gets less than $3 000 per month.

Government itself said it had set a target to make cash transfers of just Z$200 per person per month as a way of cushioning a targeted 1 million vulnerable people for the next three months. This is in a country where bread costs Z$30 a loaf.

Analysts said this is a clear sign that government coffers are empty.

Most of the spending that is needed now requires foreign currency and government has very little in its reserves at the moment.

This has seen it relax some of its laws on the use of foreign currency, which is believed to be available at household level. People are now allowed to use foreign currency for local transactions, hardly a year after this had been outlawed.

Just last week, President Mnangagwa gave a directive that Money Transfer Agencies be opened three days per week, to facilitate receiving of remittance from the diaspora during the lockdown period.

Remittances are however expected to be much lower than usual.

According to the World Bank’s latest Africa Pulse April 2020 report, a significant downturn in South Africa will affect the flow of financing to remittance-dependent countries like Zimbabwe where they constitute 8% of GDP.

Zimbabwe’s other channels of earning foreign currency are also facing their own headwinds.

The tobacco industry, which is Zimbabwe’s second biggest single forex earner, is yet to be sold, with the 21 lockdown having extended an already delayed selling season.

Issues of health at the often-crowded floors has always been of major concern and a lot will have to be done to bring the floors to the hygienic and social distancing standards of fighting the spread of Covid-19.

Tobacco Industry and Marketing Board chief executive officer Andrew Matibiri said by telephone from Harare on Thursday that the industry was still “developing guidelines on how we can go about our business of opening tobacco auction floors under the circumstances”.

He said since 2009 the country earned between US$550 to $750 million per season from the selling of tobacco.

“This year we are looking at over 145 000 farmers to come and sale their produce,” he said.

Industry experts say while some of the money had already come through inputs as the bulk of the farmers are under contracts, farmers and government rely a lot on tobacco earnings which they can only receive after selling.