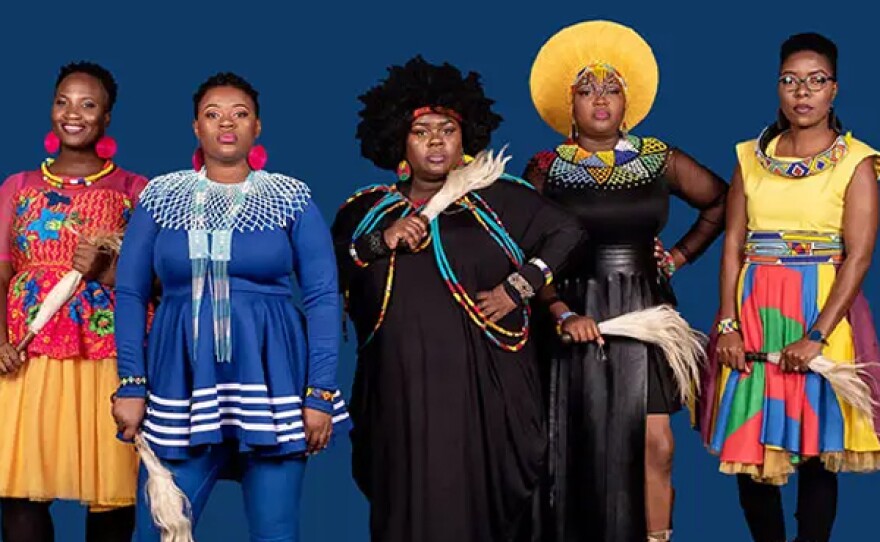 UNTED STATES: Nobuntu, a female a cappella quintet from Bulawayo, Zimbabwe, performed to an enthusiastic audience at the Lake Placid Center for the Arts on Sunday, Feb. 20. The morning before, they offered a no less exciting dance-singing workshop attended by fifteen energetic women from around the area, many participants in Soma Beats of Saranac Lake.

The Saturday workshop was led by quintet members Heather Dube, Zanele Manhenga, Thandeka Moyo, Duduzile Sibanda, and Joyline Sibanda. The dance-song workshop was based on Isitshikistha, a traditional ceremonial dance historically performed for the king’s pleasure. The dance reflected women’s joyous and practical abilities, movements, and vocalizations that the participants clearly enjoyed and celebrated in a delightful boisterous concluding circle dance, with most leaping into the center sharing what they learned.

“I wanted to attend because having women teaching women another cultural dance here in the North Country is such a rare treat,” said Zoe Smith. “Plus, I love to dance, we haven’t been out because of COVID, and these women have such a rich history. We have this local dance group, Soma Beat where we learn and teach each other dances. Having these women talk to us about the roots of the dances and include the vocals into the dance is very different for us; it was just amazing.”

“I loved this,” said Beth Bartos. “To meet these women who have come so far, to hear their beautiful voices, and to have them share part of their life with us is such a gift; I am so grateful. I had such fun dancing with friends on mine.”

Nobuntu was founded in 2012 by five women who wanted to celebrate and preserve their culture, beauty, and heritage through dance, music and singing. They met at a call for auditions by 10th District, a local music label seeking women who could sing Zimbabwean music. The women liked what they saw in each other, got chatting, and learned that they had more in common than talent; they wanted to use their artistic abilities to make a difference in the lives of others.

Members of Nobuntu give a workshop at the Lake Placid Center for the Arts. (Provided photo — Naj Wikoff)

Little did they know then that their shared vision, remarkable ability to harmonize artistically and vocally, would lead them to be nominated for Best Musician of the Year at the Zimbabwe International Women Awards in London in 2015 and become a two-time winner for the Best Imbube Group at the Bulawayo Arts Awards 2017 and 2019. Further, they have toured the African continent and performed in Europe, where they were hailed as a critical success at “Trans-Vocal” in Frankfurt and “Voice Mania” in Vienna. In 2016, they toured Canada with stops in such locales as Toronto, Vancouver, Victoria, and Winnipeg. Two years ago, a planned United States tour that would have included Lake Placid was canceled due to COVID.

Much of their music was in the Mbube-style songs, a south African genre made famous by Lady Smith Black Mambazo. Zanele Manhenga gleefully pointed out that Ladysmith has no women in their ensemble; Nobuntu is the first and only all-women Mbube vocal ensemble. For them, more delicious is that the symbol Mbube is the lion; with them, hear her roar.

Their performances are based on authentic traditional dance movements and traditional instruments such as a Djembes drum and the Mbira (thumb piano). Yet, their artistic range draws from and incorporates Mbube songs as well as Afro Jazz and Gospel. In many respects, their use of a Djembes drum reflects one of their core values. The name djembe comes from “Anke dj or anke b,” which means, everyone, join together in peace.

The word Nobuntu is an African concept that values humbleness, love, unity, and family from a woman’s perspective. The women of Nobuntu believe that the arts can help people from diverse backgrounds and life experiences connect, communicate, and support each other. To that end, Nobuntu does far more than perform and draw upon a myriad of artistic roots to connect people; they give back. As an example, they have provided workshops in Bulawayo that teach upcoming women artists the business side of the performing arts, how to create their brand, use social media for marketing themselves, and other myriad aspects of developing a career.

“Along the way, we identified issues, like the sanitary pads women need every month,” said Duduzile Sibanda. “We saw that while many were supporting less privileged people, no one was looking after the artist who is just trying to make her way.”

Aware that many young women of talent have limited means, they began to gather sanitary pads for women in the arts from underprivileged communities; indeed, the price of admission for one of their concerts might be a box of sanitary pads. They also use their concerts to both educate people about the challenges women face and help young women in their culture understand that their self-worth doesn’t have to be based on their ability to get married.

For example, “Moya,” one of the songs Nobuntu performed Sunday night, illustrated the pressures on young women to get married, become pregnant, and have a baby boy. They shared how some women whose first attempt fails turn to a spiritual advisor, who often will take advantage of them, getting them pregnant, and returning them home to an angry husband who takes another wife. “Moya” features a powerful performance by Heather Dube lamenting that she has been unable to have a male child, while the others through song tell women not to fall for such pressures; they have a choice and are worthy of a life not measured by their ability to bear children.

“For me, music, especially singing, is very therapeutic,” said Sibanda. “I love singing anywhere I get the chance. To sing professionally, something I love to do, means a lot. And, I love traveling. Nobuntu enables me to see spaces and places I’ve never experienced before, and to speak to women, to people in my country and beyond.”

“Experiencing Nobuntu through their workshop and now this performance as left me filled with joy and the feeling of love, of bringing cultures from Africa to the Adirondacks,” said Johnna MacDougall, founder of Soma Beats. “They are letting people know that there is more music, more song, more love that can be brought to our community and be shared with others. Their using music to speak, especially to young women, is very valuable to the women in their culture and us. There have been traditions passed down from one generation to the next, and these women are saying no more. We’re even saying that in America. Women are saying no more; we are strong. We’re going to do what we need to do; we’re going to be for real.”