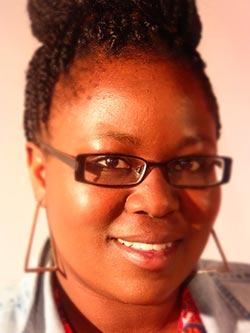 WHERE you’re happy is where you plan to carry on living. Isn’t it? Not unless you don’t know if you’ll be allowed to live in your home, in the country you’ve made your home.
But what about this period when you are waiting to find out if you’ll be asked to leave the world you’ve become part of? What if this waiting period can last for years?
And just as you’re adjusting to your new world, you have to keep the thought in your mind that the next knock at the door will mean your idea of home – and all your future plans – are about to disappear?
Zodwa Nyoni’s new play Nine Lives, running at Glasgow’s Oran Mor this week, offers a fascinating exploration of this subject.
It tells the story of Ishmael (Lladel Bryant) a young man from Zimbabwe who has been living in a Leeds council estate while waiting for the results of his application to remain in the country.
“I got the idea for the play because I had a friend who was going through this experience,” Zodwa reveals. “He grew up with the sound of guns and terror and he came to England for a new life.
“But as well as coming to terms with the new culture, he had to come to terms with the waiting to be decided upon.”
The 25-year-old writer adds; “I wrote this play because I know what it’s like to have to keep on going. And what I mean by that is the immigration people don’t just police the country at the airport, they police your spirit.
“They keep you hanging on and they try and break you. They try to make you quit and go back where you come from.”
She adds in soft voice. “It’s a terrible process.”
Zodwa’s friend was eventually deported. “It was really sad. He wanted to study music and that won’t happen in Zimbabwe.”
But her play isn’t informed only by her friends’ experience.
She too spent years waiting to find out if she would be allowed to remain in the UK. Zodwa’s family first came to Britain in 1992 when she was aged four.
Her father and academic was studying and working at Leeds University. His studies over, in 1995 the family returned to Zimbabwe for four more years.
But in 1999, the family returned when her father came back to study for his PhD, thanks to a Commonwealth Scholarship.
Zodwa, her mum and six brothers and sisters, lived in Leeds under the stamp of her father’s visa.
However, in 2006 her dad, who “never really felt at home in Britain,” returned to Africa. But the rest of the family decided to stay in Leeds.Advertisement

She said: “I was connected to Zimbabwe but Britain had taken a big chunk of our childhood.
“My socialisation was here. But because we’d come over on my dad’s visa we had to apply to stay. And we had to wait. And wait.”
For an incredible six years. Meanwhile, Zodwa couldn’t go to university or travel freely.
As a youngster, she’d written as a hobby and was so successful she was picked for writing teams to travel to the States.
“It was awful,” she says. “I’d see opportunities come and go and it was a life of constant concern. And it was about never just having one plan in life.
“You had to have a Plan B, just in case the immigration judgement went against you.
“And even when you make friends, you then have to tell them you may be leaving. It’s very heavy.”
Zodwa was finally granted permission to remain in the UK.
However, she says the cultural confusion, the sense of displacement and having your head in two worlds has a positive side.
She said: “When I went back to Zimbabwe as a seven year old I didn’t know the national anthem and felt really awkward. I couldn’t even speak the local language. I’d forgotten it.
“Then as I got the hang of it, I was back in England. But I guess that experience has helped form me as a writer. I’ve learned from both worlds.”
Zodwa recently gained an MA in Writing and Performance and is now Channel 4’s Writer in Residence at West Yorkshire Playhouse.
There’s been another impact on her life.
“I’ve become fearful of being disconnected,” she admits.
“I don’t want to lose contact with cousins or friends. It’s made me value people and cherish relationships. And that’s not a bad thing.”
This article was initially publised by the Evening Times.