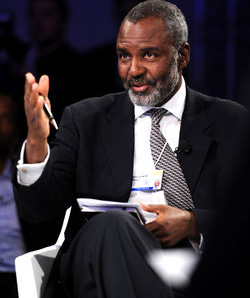 IN recent weeks, various messages have been circulating on social media speculating as to whether your good self could be prevailed upon to consider running in the 2018 Presidential elections. I am writing to you to add my voice to this growing chorus of long-suffering Zimbabweans, urging you to consider this audacious suggestion and run for the highest office.
In your letters to President Mugabe last year, you correctly summarized our well-known economic and political problems whose chief architects are Robert Mugabe and Zanu PF. I would add that they have been aided and abetted by a limp-wristed opposition, who have proved ineffective at the polls, in parliament and in governing various municipalities.
Today we have an opposition leader now demonstrating the very same handiendi tendencies as Mugabe whom he criticizes. We have an opposition leader implicated in corruption which we thought he eschewed. With respect, the opposition leader has become as non-viable as they are fragmented.
Dr Moyo, Zimbabwe cannot afford another 5 years of Zanu PF. We have a generation of graduate vendors that has grown up surrounded by a kiya kiya informal economy. What frightens most right-thinking Zimbabweans is that the failed Zanu PF has the audacity to suggest that, after 37 years of mismanagement, it will suddenly have a Damascus experience in 2018 and reverse course.
We know corruption and mismanagement is in Zanu PF’s DNA. Just recently, the papers have been writing about the indebtedness and financial rot at the Ministry of Justice presided over by Minister Mnangagwa. This is the same fellow who touts himself as a pretender and potential successor to Mugabe. Yet he has a track record of abysmal failure in the public service, even in his own home constituency in Kwekwe rejected him.
The same applies to the likes of Amai Joice Mujuru and her cronies in the People First project like Gumbo and Mutasa. That whole coterie of present and former Zanu PF senior officials are not known for any reforms or policy success. Even in their personal business dealings, they have been followed by a track record of failure and mismanagement. President Mugabe himself recently lamented how his dairy was losing money hand over fist through mismanagement.
This present Zanu PF generation is not fit for purpose. They continue to believe in outdated cold-war economics where a successful business means owning grinding mills, buses, trucks and a bottle store. They do not grasp or understand the drivers of a modern economy. Which is why they fight people like Strive Masiyiwa. We all know the world is transitioning towards digital and knowledge economies which require skills, a different political vision and understanding.Advertisement

Many of the major developed and emerging economies have long transformed their economies into services economies, which is where greater value lies and higher paying jobs can be produced. How can a person like Mnangagwa understand how to transform Zimbabwe into the Silicon Valley of Africa? How can Joice Mujuru ever understand how to develop agricultural value chains and transform Zimbabwe into the agro-processing hub in Africa?
If Zanu PF cannot even run a financially viable railway how can they ever transform Zimbabwe into the transport and logistics giant in the region? We have seen the likes of Gono practice voodoo banking. We have seen the likes of Chinamasa running to and fro without success to satisfy the IMF and other lenders. It is clear they are totally clueless about how to run an economy and create jobs.
Dr Nkosana, in the famous words of Lord Kitchner, “YOUR COUNTRY NEEDS YOU!”. Your track record in government and business, and your impeccable academic credentials speak for themselves. It is a fellow of your calibre that Zimbabwe needs to turn its economy around. We have seen from examples elsewhere – Kagame in Rwanda, Outtara in Cote D’Ivoire etc – how one focused and resolute individual can harness the dynamism needed to completely change the economic and political trajectory of the entire country. We hope with the support of other right-thinking individuals and business persons you can be convinced to take up this clarion call.
We need a President who understands how to develop a 21st Zimbabwean economy. A President who will unite Zimbabweans and stamp out corruption root and branch; destroy the culture of state capture and the rot that has beset our parastatals and restore professionalism to government, the security forces and local municipalities. We need a President who will nurture and grow our democracy and destroy the cult of personality long embraced by Zanu PF.
We need a President who is sensitive to addressing the needs of women, the disabled and previously marginalised Zimbabweans in areas like Matabeleland. We need a President who will safeguard our natural resources, our minerals, our wildlife and use these resources for the benefit of all Zimbabweans. We need a President that domestic and foreign investors, and international financiers trust, in order to get much needed capital flowing to the country.
We need a President that restores dignity and stature back to Zimbabwe, and is not a laughing stock around the world for toppling over and sleeping at international conferences. We need a President who will inspire our diaspora to repatriate their skills and, in less than a decade, I believe Zimbabwe would be a leading economy in the region.
In closing, Dr Moyo, we all know Zimbabweans are hardworking (but politically asleep). Scattered as we are around the world Zimbabweans have excelled in all fields. They need a man of vision for 2018 who can harness all those pent-up energies that are clamouring for change which you witnessed with the situation concerning Pastor Evan Mawarire, Tajamuka and others. Rest assured of our full support.