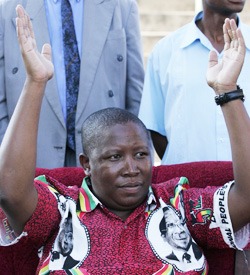 The leader of the Economic Freedom Fighters, Julius Malema
Honourable Julius Malema, A few weeks ago you were placed on record making very preposterous claims regarding the President of Zimbabwe, His government, his policies, and the general welfare of Zimbabweans.
In very implicit terms, you expressed very disturbing opinions to the effect that Zimbabwe’s problems are not the making of an individual, but collective efforts of external and politicised ‘white capital’ interests. You exonerated Cde Robert Mugabe and his regime of any fault at all. You called the situation in Zimbabwe a ‘necessary pain’ that African societies must all endure in their efforts for liberation.
Having mulled over your remarks, I have come to the conclusions that; one, you are looking to score cheap popularity gains through nationalism, and blind populism. And two, you are hopelessly misinformed about the true nature and magnitude of Zimbabwe’s problems, while repulsively insensitive to the plight of over 13 million Zimbabweans, of whom a staggering 5 million are camped illegally in your country as I write this.
Honourable Malema, by the positions you uttered, I have come to the informed supposition that your thought configurations are not commensurate with the title of ‘Honourable’, or the office of a leader of a movement founded on sovereignty like the Economic Freedom Fighters, never mind the hopes you harbour of one day becoming the President of a model democracy like The Republic of South Africa.
There are several hard reasons why I have come to such a disappointing conclusion, and like many South Africans of noble minds, have categorically written you off to the unforgiving label of a political clown fetched from the scariest of horror sequels.
To begin with, at the most simple level, Zimbabwe’s economic problems that culminated in total paralysis in 2008 are categorically not the sophisticated architecture of western imperialists and white ‘capital’ as you bellow. If you had the slightest inclination to indulge yourself into reading any book about post-colonial Zimbabwe, or speaking to an informed economist, you too, would know this; but perhaps reading, like thinking, is not your thing.
Need I inform you sir, that between 1980 and 2000, Zimbabwe’s government spectacularly indulged itself into bad policy making binges of the most shocking order. Incompetent high ranking officials looted public funds, and ran state parastatals dry. In that period, several critical decisions derailed the economy significantly. It may require a comprehensive 10, 000 paged book to note all the evils perpetrated by the Zimbabwe government, and how they have annihilated the economy, but I will perhaps explain the few critical ones to cure your ignorance.Advertisement