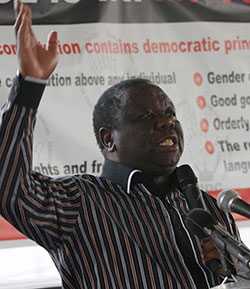 THIS letter addresses you in your official capacity. Since losing the July 31 elections, followed by the violence on Elton Mangoma, Tendai Biti and others I have not spared you the rod yet somehow you are the father and have been the face of this struggle.
If we were to write history without acknowledging the personal sacrifice and role you have played in this struggle we would be guilty of telling naked lies. You are, without doubt, a tall, brave and gigantic figure in this struggle against tyranny.
The reasons for the restlessness in the party must be examined thoroughly before any words are spoken or action taken. The young ones are extremely lucky to have had a father figure who gives depth to the struggle. By that I mean a figure who brings across both urgency and maturity to the cause. In other words, someone who takes away from this cause the feeling that it is merely the restlessness or delinquency of youth, puberty or testosterone. You have given to this struggle the dignity and decency of a mature leader working together with young and old over a shared concern. Fairness demands that we acknowledge this.
I want you to understand though that you have not always been a consistent man. You have not always had a clear message about what your government would be about. There is an emphasis on human rights and jobs but the delivery of this message has never been anything but an appetiser.
Your message has not been forceful and forensic enough. It would be good for a message to be thoroughly clear as to draw marked distinctions. You could have said, for instance, that President Robert Mugabe deserves a standing ovation for taking land without compensation and then urged people to boo him for giving the land to his few friends whilst there is still a land crisis affecting everyone else. Policies must be delivered clearly to those for whom they are intended.
My main issue today is to do with the leadership crisis in your party and how you can choose to handle it. There is a belief that after three consecutive defeats you have failed and must be replaced. You appear to think that you should have another go as you are the public face of the largest opposition.
There are merits in both arguments. It is true that a party needs renewal if things keep getting worse. I agree that things are getting out of hand under your leadership and a lot of disillusionment has resulted from the chaos. I also believe the case of those who want you replaced. But you have chosen to remain anchored to your seat, so let’s deal with the facts according to the situation as it stands as you remain the leader.Advertisement

The MDC you lead is the country’s largest opposition party. My own party NCA is still building structures and, as such, is realistic about its prospects by 2018. Every election lost to Zanu PF has a cost on the lives of the ordinary people who suffer immensely under that dictatorship. For that reason, it is important that all the provinces of the opposition assemble together under a clear focused and united leadership to shape a way forward towards a democracy. This is why what happens in each of the opposition provinces, especially the largest province, is of vital importance to the rest of us.
It essential that you recognise the vulnerability you suffer if other provinces of the opposition continue to perceive you as an inward-looking hostile leader who is content with holding an office in an opposition party so long his belly has food in it. I do not want to think you have metamorphosed into such an antitheses of what we have toiled for, for so long.
What is urgent, Mr Tsvangirai, is to build bridges. You must do that now and you must be serious. To begin with, you must calm down your hawks who are demanding Biti’s and Mangoma’s blood; they are misguided. You must reinstate Mangoma and reassure Biti. You must also choose your words wisely when discussing the future of the party in public and avoid fanning the fire.
These men have a right to talk and discuss the leadership whichever way they want; that is democracy. You must be witty in how you handle both those who benefit from overthrowing Biti and Mangoma and crew as you must be shrewd on how you handle the succession matter itself no matter how angry it makes you. I will give you a possible suggestion to help you become the bigger person. You must give the following assurances. First, that this will be your last term as leader going into 2018 elections. It gives confidence to supporters and those that have been worn out by your leadership.
Secondly – that if you win the elections you will serve one term only to give others a chance and the party continuity. This assures supporters can see a Mandela personality in you.  Thirdly – that if you lose and whether you dispute the election or not you will step down from the party leadership. This allows the party to focus on the election. Fourth – that you will seek the mandate to bring in a multi-party leadership (Opposition of all colours) to gather around your candidacy to produce both a collective manifesto and the first five-year programme of action. This shows you to understand your enemy combatant and you know what you need to do.
Your party must understand the need for solid leadership and the need for collective opposition. They must understand that we are living under a dangerous regime. The social impact of this regime makes this an emergency upon our nation. We cannot continue to live under a government that is essentially in existence to steal whatever is there. To be effective we must clearly come together in our different shades and choose a way forward that removes this immediate danger from our lives.
If you accept that we have been through salary-gate (an eye-opener), and perhaps we have some thousands of ghost civil servants being pay-rolled into some shef accounts (in a country with over 80% unemployed) you will understand the magnitude of what is at stake to freeze and start to think of the big picture and call all the opposition provinces to meet for an urgent way forward. I need not lecture to you about what wrongs we need to right.
If I were you, Save, I would make assurances to Biti and his team, the supporters and the electorate that I will ensure continuity going to and after the election. You need stability if you want the party to win. You need Welshman back in the camp, the Mutambaras and the Madhuku and NCA party, Simba Makoni, Dumiso Dabengwa, working with you over what is possible and not possible by 2018. That should start now. You need to make pledges to other opposition provinces and talk sense into those around you who are not yet mature enough to understand that Biti, Bennert and Mangoma are not enemies. They want this struggle to get results and are being impatient and they are with the majority who have lost patience.
Job Sikhala, on his own, makes little difference. He might be an asset, yes, but he too, by re-joining your camp, realises that the task ahead needs a collective effort. He is not doing so out of cowardice but bravery. But to expect everyone else to follow Sikhala and walk back into camp is to undermine the mistrust your leadership has generated. You may need to sit down with those around you who feel threatened by a true broad-based movement of all talents and tell them that this struggle is not about their little egos but about some twelve million people whose lives depend on the decisions we will make today.
Whether by force or by election, overthrowing Zanu PF from power will need us to sing from one hymn book, singing the same song, the same note, at the same time.
Its over to you Save
Yours in Struggle
Courage Shumba writes in personal capacity.