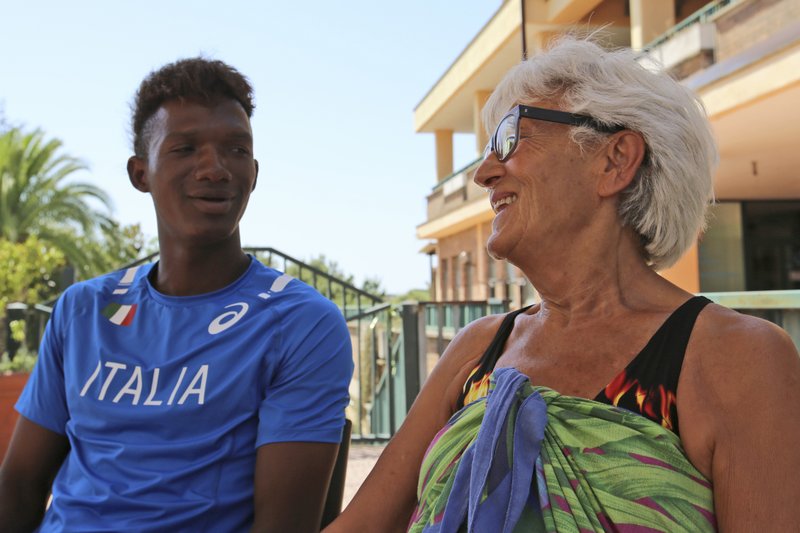 Asylum seeker from Mali, Moriba Mamadou Diarra, 18, looks at his mobile phone as Barbara Di Clemente, 79-year-old Italian grandmother, talks to him at her home in Rome. Di Clemente has been hosting Diarra in her home for a few months through a program called "Refugees Welcome" where Italian families can apply to open their homes and host young refugees in need.
Spread This News

ROME: Italy has made headlines as a hard place for migrants recently, with racist attacks against blacks on its soil and a new government closing Italian ports to people rescued in the Mediterranean Sea.

But not all Italians are on board, and some are even reaching out to migrants.

Barbara di Clemente, a 79-year-old grandmother, opened her heart and home to Moriba Mamadou Diarra from Mali, hosting him at her two-bedroom apartment in Rome for the past four months. The 18-year-old says he fled his country because there, his “rights had been denied” and he couldn’t study and build a better future for himself.

She says that taking in Diarra, who dreams of playing professional soccer, has been her own way of helping someone in need while making a political statement against Italy’s populist, anti-migrant government. Di Clemente is among a growing number of Italians who have applied to host young migrants, stepping in to fill a gap in government services even as the number of new arrivals to Italy plummets.

“Something in my soul spoke to me,” Di Clemente said of her decision to host Diarra, adding that having lived through World War II, she is particularly sensitive to wars and poverty.

She contacted Refugees Welcome, a humanitarian group founded in Germany in 2015 that helps organize migrant hosting and now has chapters in 16 countries. The Italian chapter, which normally registers one or two hosting offers per day by Italians, saw an 80 percent spike in offers since the June 10 decision by Interior Minister Matteo Salvini to turn away a rescue vessel carrying more than 600 migrants rescued from the Mediterranean.

Sara Consolato, the group’s spokeswoman, says volunteers want to show the migrants that not all Italians agree with the government’s hard line. “They are a minority, but they exist,” she said. “They don’t identify with these policies and they feel the time has come to take action.”

Some gestures don’t rise to letting a complete stranger move in but are no less significant, and have come amid a spate of racist attacks against blacks and non-Italians. A coffee shop owner in Adria in northern Veneto — a region that has long supported Salvini’s anti-migrant League party — started printing out cash register receipts last month stamped with “No to racism, yes to an integrated Adria.” Another local businessman took out newspaper ads with the same message.

Although the League’s popularity has soared since it took power with the populist 5-Star Movement after March 4 elections, some 72 percent of Italians support the principle of asylum and 61 percent feel concerned about the rise of racism and discrimination, according to a survey by pollster Ipsos MORI and commissioned by More in Common, a nonprofit organization that works against xenophobia.

However, the survey also found that only 18 percent of respondents view the impact of immigration on the country positively. The survey consisted of online and phone surveys of 2,000 people between 2017 and 2018. The margin of error was between 0.4 and 2.1 percent.

Di Clemente, a retired therapist, said that while watching the news she had thought several times about welcoming a refugee in her home. After a check-up by Refugees Welcome, Diarra was assigned to her apartment in Rome.

“We introduced ourselves, and I told him: ‘My heart is racing, and yours?’ And he said: ‘Mine, too,’” Di Clemente recalled of their first meeting.

She set two basic rules right away: No smoking, no drugs.

“The truth is that I don’t smoke, so I felt good about moving in with her,” Diarra said.

He said he loves their frequent trips to a nearby sports center, where he trains and plays soccer.

“Soccer is what gives me the strength to get up in the morning, to go study, to work,” he said, wearing the jersey of the Italian national soccer team. “It pushes me to become a better person.” 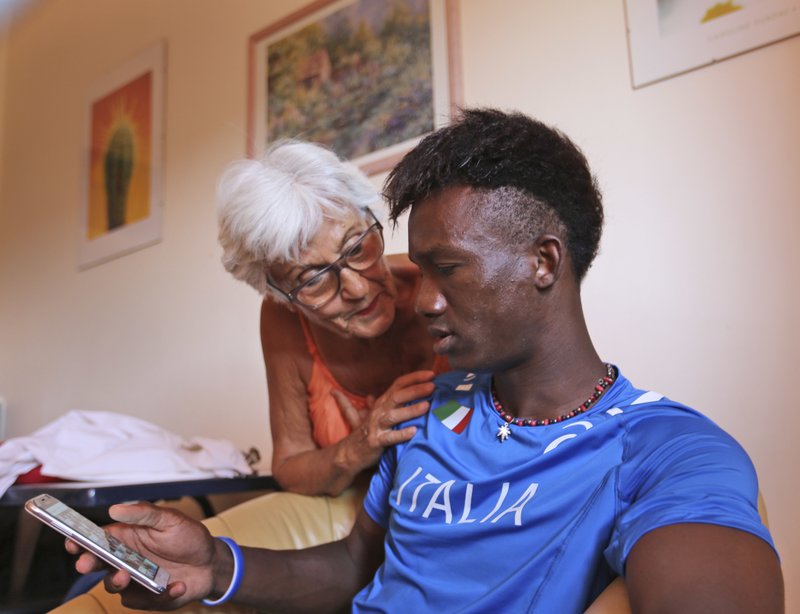 Diarra was among some 15,000 unaccompanied minors who arrived in Italy by boat in 2017. For a few months, he lived in a residence for migrant children in Rome, where he attended school and studied Italian.

When he turned 18, he was transferred to a reception center for asylum-seekers, a 90-minute drive from Rome, where he said he received very little support in his attempt to learn Italian and integrate into society. He was relieved to return to Rome.

Living together presented some challenges. At first, Di Clemente was bothered by Diarra’s reluctance to look into her eyes when they spoke. Diarra explained that in his culture young people don’t face older people out of respect, but the woman insisted that he adapt to Italian culture. She said she also taught him to do the Italian double-cheek kiss.

Diarra, a practicing Muslim, observed the fasting month of Ramadan earlier this year, despite Di Clemente’s concerns that he should not attend soccer practice while fasting. He decided to compromise by breaking the fast on training days and adding a number of fast days after the holiday.

In the kitchen, Di Clemente appreciates their cultural differences. “The things he cooks are better than what I cook,” she said with a laugh.

Diarra now works at a summer camp by day and plays soccer in the evening, as he waits for his asylum application to be processed.

According to data released by Vatican charity organization Caritas, the Interior Ministry rejected more than half of the 41,379 requests in the first half of 2017. It granted refugee status to only 9 percent of the applicants, while the remainder obtained a residency permit for “humanitarian” or other motives.

Most applicants reside in reception centers across the country. After receiving the papers, they can apply to enter centers of “secondary reception,” but fewer spots are available there, and some end up living in tent camps.

Despite criticism from many humanitarian groups, Interior Minister Salvini — whose motto is a Trump-like “Italians First” — has recently announced that the government will limit benefits to the migrants who have already received protection status. He’s also vowed to reduce aid for asylum seekers. Salvini often uses the phrase “The party is over” when he refers to migrants.

Paolo Morozzo della Rocca, the Rome-based supervisor of migrant services of the Sant’Egidio Catholic charity, said it’s counterproductive to keep migrants in a limbo without helping them to build a future for themselves.

Diarra, who stressed his belief in the importance of learning Italian and integrating into Italian society, said he doesn’t pay attention to what Salvini says.