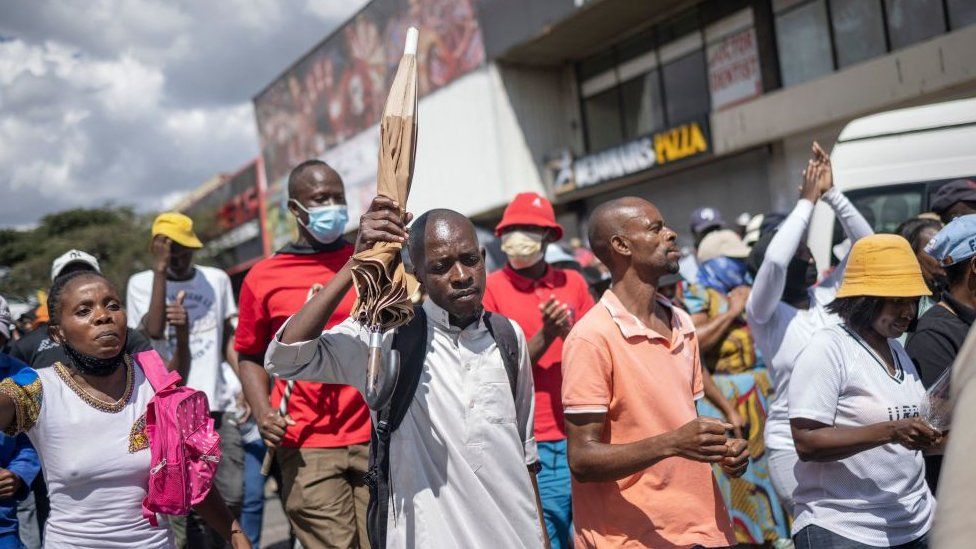 Police in South Africa are on alert in case of renewed clashes between residents of Johannesburg’s Alexandra township and foreign street vendors.

Alexandra is one of the poorest areas of the country but from its shacks, residents can easily see the towering skyscrapers of Sandton, one of the richest commercial districts on the whole continent, just a few kilometres away. As a result people from across South Africa and neighbouring countries flock to the township to use it as a base to earn a living.

Two controversial groups – the Alexandra Dudula Movement and Operation Dudula – which are campaigning against undocumented foreign nationals have emerged recently and support seems to be growing among South African communities who feel marginalised.

There are concerns that their campaigns could lead to yet another outbreak of xenophobic violence in the country.

What do these groups want?

Poverty is the main driver of the tension as South African residents believe – whether rightly or wrongly – that foreigners are the cause of many of their difficulties.

Dudula is a word in the Zulu language which loosely means to “push back” or “drive back” – this gives a clue about what they want.

Though the two groups are separate, they have been inspired by the same cause – they both hope to drive out undocumented African migrants from their communities.

They believe by doing this they can ensure that jobs and business opportunities go to South Africans.

What is the difference between the two groups?

The Alexandra Dudula Movement was founded last year. The people behind it alleged that foreign nationals were illegally occupying government-issued housing in Alexandra, which is supposed to be for poor citizens.

But the campaign has expanded to include a call for all undocumented African migrants to stop trading in Alexandra. Last month, the movement closed down all the stalls owned by foreign nationals who could not show the correct papers for running the business or a valid passport.

They then assigned the stalls to South Africans, such as Alexandra resident Wendy Sithole, who started selling vegetables when the foreigners were forced to stop.

“We as South Africans are unemployed and are going hungry. All we want is to get jobs too,” she told the BBC. “How do they expect us to survive in our own country?”

Not all of the group’s actions have been legal and the authorities are investigating cases of public disorder and intimidation.

Operation Dudula is based in Johannesburg’s Soweto township – more than 25km (16 miles) away on the other side of the city.

Founded by 33-year-old Nhlanhla Lux Dlamini, it came to prominence last June when Soweto residents marched through the township on what was called a “clean-up” operation.

It targeted suspected drug dealers and people who were alleged to be illegally occupying government property.

But just as in Alexandra, the group’s scope of interest has expanded.

Members now want the many foreign shop owners in South Africa to shut down their businesses and leave the country.

They also want small businesses, such as restaurants and shops, to only employ South African citizens. This is because campaigners believe these places overlook South Africans and hire undocumented migrants instead because they can pay them less than the minimum wage.

Authorities have said while this may happen in some places it is not a widespread problem.

Both groups have denied that their motives are xenophobic and argue that they are simply protecting the livelihoods of South Africans, something they say the African National Congress (ANC) government is failing to do.

They both say they are not affiliated to any political party.

What has the reaction been?

From foreigners there is a sense that they are being blamed for wider problems.

“We’re not taking anyone’s job, we create our own opportunities, we’re not stopping South Africans from doing the same,” Mozambican Sam Manane, who has been selling snacks in Alexandra for the past 10 years, told the BBC.

The national government has not yet reacted but the premier of Gauteng province, which includes Johannesburg, the ANC’s David Makhura, has said he is concerned about the recent violence against foreign nationals in Alexandra. He called on civil society groups to work with the government to promote peace and tolerance.

But some opposition parties are trying to make political capital out of the issue.

One that is taking a hardline approach is the newly formed Patriotic Alliance (PA) led by ex-prisoner Gayton McKenzie. The PA, which has some local council seats but has not yet run in a national vote, wants all undocumented migrants to leave the country.

Earlier this year, members of the opposition Economic Freedom Fighters unexpectedly visited restaurants in Johannesburg to “inspect” the ratio of foreign workers employed and to put pressure on business to hire more South Africans.

On the issue of checking peoples’ status, the government has said that it is doing more to ensure the people have the correct documentation – but that will take a while.

Why is this happening now?

This is not the first time there has been an upsurge in anti-foreigner sentiment in South Africa.

In 2008, there was a wave of attacks across the country against refugees and migrants – more than 60 people were reported to have been killed and thousands displaced.

There were further outbreaks of violence against non-South Africans in 2015, mostly in the cities of Durban and Johannesburg, which led to the deployment of the army to deter further unrest.

And three years ago another rise in attacks on foreigners led to hundreds of Nigerians leaving the country.

It is not clear exactly why the issue is coming up again but South Africa’s numerous economic problems have been exacerbated by the impact of Covid-19 mitigation measures which resulted in the loss of countless jobs and a sharp spike in the cost of living.