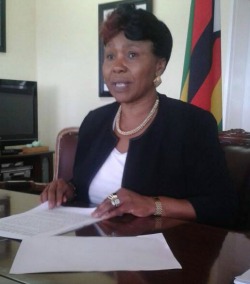 Environment, water and climate minister, Oppah Muchinguri-Kashiri said her portfolio needed $20 million to implement the Command Wildlife and Fisheries programme.
Government, late last year, introduced Command Livestock program which also encompasses Command Wildlife and Fisheries.
The initiative is aimed at increasing and improving food and nutrition by intensifying meat production which had deteriorated over the past two decades.
The entire programme, according to the Finance ministry, needs $300 million.
Out of the total $300 million government said it was able to provide $80m and appealed to the private sector for the remaining $220 million.
Speaking to the business community recently in the capital, minister Muchinguri-Kashiri said at least $20 million was needed for the Command Wildlife and Fisheries project.
“This programme requires at least $20 million in terms of financing and also requires intensive marketing, a lot of research and collaboration for it to succeed,” he said.
She said government had spared 200 big dams for Command Fishing.
“Under the first phase 200 big dams will be used mainly for three forms of fishing project which the cage culture  and we will have the commercial big companies like what we find in lake Kariba under Lake Harvest,” said minister Muchinguri-Kashiri.
She added, “We will also be putting up at least eight cages in our 200 big dams and on the medium to small scale we will be putting four cages per dam and lastly we will be having artisanal fishing where the Zimbabwe National Parks and Wildlife management will be issuing  licenses to individuals interested in the fishing project(s).”