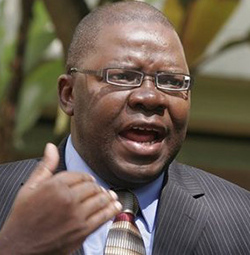 IT’S a laughable matter to see a power hungry Tendai Biti making efforts to establish an opposition coalition with Simba Makoni as its leader because I honestly wonder if Biti really thinks that grouping up with Makoni and Welshman Ncube is the best way he is going to appear as tinsel to the people of Zimbabwe.
What boggles is the question why Biti is taking the national politics of Zimbabwe for granted. I think Biti needs a ‘strait-jacket’ to control his nature otherwise the gentleman is going to distort all efforts to avert political instability in Zimbabwe. If he masticated the idea of establishing a coalition party exclusive of MDC-T then he should be a natural adversary of progress in Zimbabwe. Why should there be a coalition to fight both MDC-T and Zanu PF?
It doesn’t require a rocket scientist to realize that Biti’s idea and effort is politically out of the question, otherwise he’s becoming more of a cornered ‘mompara’ in the face of Zimbabweans. Job Sikhala told supporters at an MDC-T rally in Glen-view that the former renegade’s party is like Barclays Premier League team – Arsenal. I understand that Sikhala was motivated to relate Arsenal to MDC-T by the recent win of Arsenal over Hull City to clinch the FA-cup and the behaviour of its supporters who have been unwaveringly rallying behind Arsene Venger (coach). Sikhala went on to say that MDC-T’s struggle for power should not be a relay, instead it’s a marathon hence its fine for Tsvangirai to compete alone even up to the age of 90.
I find Sikhala’s character as more open, militant and aggressive than Biti’s and if the MDC-99 founder submitted to the political reality of Zimbabwe that it’s ‘cold’ out of MDC-T and Zanu PF, then why should Biti and friends hang on to a pendulous dream. If Biti and team successfully launch a coalition party, the very same day shall flash their doom because a small crowd is going to attend that event. MDC-T is proving to be strong as shown by large crowds who are attending rallies. Zanu PF is always strong as shown by the capitulation of Sikhala and his eventful comeback to MDC-T. I believe the coalition team is desperately going to address people in trains like Shakespeare Maya of NAGG; otherwise no politically alert person is going to invest in their party let alone attend their rallies.Advertisement

Two things that I inferred from Sikhala’s remarks are that it’s not easy to find a suitable leader because he couldn’t find a leader in himself and age is nothing but a number in politics. He highlighted the age 90 which is President Mugabe’s age. A closer inference can then come to the conclusion that Sikhala was knocked out in a bout between with Cde Mugabe and now he has turned to Morgan Tsvangirai for help and reinforcement. He was outmatched by Zanu PF to the extent that he’s one among the monotheists who now believe that it’s only the ‘gladiators’ of MDC-T who can go to battle against a strategic Zanu PF.
It’s not sententious to urge the coalition team to go on and launch their party because people are already waiting for their promulgations. Let’s hope they won’t be empty proclamations otherwise the people of Zimbabwe are going to view them as somnambulists. However Sikhala’s comeback revealed the political reality that you can never be a servitude to the political wilderness, for its hot and dry out there.