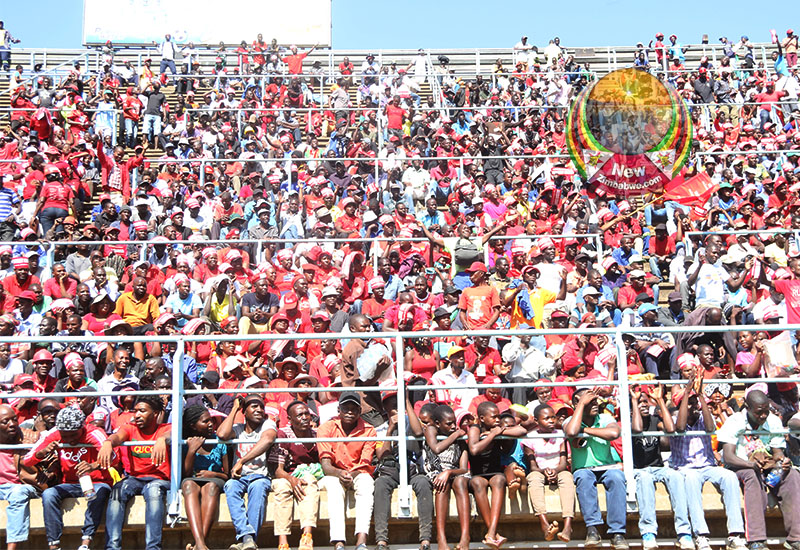 WHAT is in a name? The rumbling dispute over the proprietary rights to the name – Movement for Democratic Change (MDC) – looks set to blow Zimbabwe’s opposition out of the political water.

Activists in Zimbabwe and foreign politicians, such as US senators, see the legal and political fight among the MDC as further weakening the country’s democracy and being orchestrated by President Emmerson Mnangagwa’s government.

Speaker Jacob Mudenda dismissed the MPs after leaders of a breakaway faction of the MDC said that Biti and his colleagues were no longer members of the party.

Under Zimbabwe law, if an MP leaves the party for which they were elected, they lose their parliamentary seat automatically.

Biti had been chairing the Public Accounts Committee which has published several investigations into what he called “state capture” by the ruling Zanu PF.

Next month, the Committee is due to release an investigation on corruption in the mining business, which is thought to have named some of President Mnangagwa’s closest business associates.

Divided over a name

The fight over who is entitled to use the MDC name exploded a year ago when Zimbabwe’s Supreme Court declared in favour of a smaller faction of MDC activists challenging the leadership of the party’s presidential candidate Nelson Chamisa and his right to use the MDC name.

The court ruled the MDC must elect a new leader, triggering what looks like a terminal split in its ranks. Most of the MDC cadres and MPs sided with Chamisa.

Over the last year over 30 MDC MPs, all of whom backed Chamisa, have been expelled from parliament. As the leading opposition candidate in the 2018 elections, Chamisa narrowly lost to Mnangagwa, standing on the Zanu PF ticket, in a vote that he said was stolen.

Chamisa refuses to recognise Mnangagwa’s presidency but has said he would be willing to work with a power-sharing transitional government if the terms were right.

Zimbabwe’s multiple economic and political woes attract sporadic attention overseas. On 22 March, Jim Risch, chairman of the US Senate Foreign Relations Committee, blamed the recall of Biti and the other six MPs squarely on the Mnangagwa government.

“The recall of Biti and other members of parliament in Zimbabwe last week is yet another example of the systematic dismantling of the elected political opposition and subversion of the will of the Zimbabwean people.”

Earlier in March, the new US administration under President Joe Biden renewed travel and financial sanctions on Mnangagwa and the ruling clique, accusing them of having “routinely intimidated and violently repressed citizens, including members of opposition parties, union members and journalists.”

Key to the strategy of ousting Chamisa from the opposition leadership is a former opposition comrade Douglas Mwonzora, who now leads a faction known as MDC-T.

The ‘T’ stands for Morgan Tsvangirai, the trades unionist who founded the MDC in 1999 but who died in 2018 without presiding over a clear leadership succession in the party.

Mwonzora’s faction says it has started a process to stop Nelson Chamisa-led MDC Alliance from using the MDC name in any way.

Last year another court ruling expelled Chamisa’s grouping from the historic headquarters, Harvest House, of the MDC in Harare.

What is in a name?

Pride Mkono, a political analyst and student at the University of South Africa tells The Africa Report that the name ‘Movement for Democratic Change’ is a mantra for change.

“It is a reflection of Tsvangirai’s legacy where we have an inconclusive process. He died in office without having sorted the leadership crisis,” adds Mkono.

Factional fights started within the MDC in 2005, causing it to split: one comprised MDC-M [led by Arthur Mutambara, later replaced by Welshman Ncube]; and MDC-T that was led by Tsvangirai who had a huge following among Zimbabweans. While Job Sikhala formed his MDC-99.

Since last year’s court ruling in his favour, Mwonzora has been in control of the MDC-T party logo, its national offices, its members of parliament, and ward councilors –– all nullifying Chamisa’s MDC Alliance.

Pride Mkono says Mwonzora and allies could press their advantage through the courts.

“The courts are their arena. They will want to take legal action because that is where they came from, they are a legal creation,” Mkono says.

Independent experts think it likely that a court could indeed ban Chamisa from using the MDC name in any way.

Taurai Mabhachi, a human rights activist, tells The Africa Report: “The MDC-T (led by Mwonzora) has no locus standi to argue this case in a fair, reasonable and impartial court of law because the MDC-T and MDC Alliance (led by Chamisa) are two different names.

“Given the frivolous interpretation of statutes in Zimbabwe chances are very high Chamisa may be forbidden to use the name.”

Knives out for Chamisa; can he withstand the battle?

Although Chamisa led MDC Alliance is the most popular opposition party in Zimbabwe, its legal battles have critically weakened it and destroyed its financial base. It is fighting both the ruling Zanu PF which has free access to all the powers and patronage of incumbency.Top of Form

The challenge goes far beyond party politics, according to Chamisa, speaking at a press conference run by the Crisis in Zimbabwe Coalition in Harare

“Our common destiny is under threat and it is no longer about the MDC Alliance to liberate the country from the democratic struggles under the Mnangagwa regime,” said Chamisa. “Citizens need to unite and converge. A united citizenry cannot not be defeated.”

Although Chamisa calls for a non-partisan approach to the defeat the Mnangagwa regime, analysts say he must address the question of political brand and what to call this new movement ahead of the 2023 elections.

“The future of opposition politics is bright should the Chamisa led MDC Alliance take quick steps to change its name. The MDC Alliance must make it known to the general populace, explaining why the name had to be changed,” Mabhachi said.

MDC Alliance presidential spokesman, Nkululeko Sibanda says it is a fallacy to call Mwonzora part of opposition politics in Zimbabwe.

“We know where he stands politically and he has worked to strengthen his benefactors in the ruling party Zanu PF. Mwonzora has no more impact on the struggle for democracy, he is just an appendage who works to enhance Zanu PF.”

President Mnangagwa recently announced that he wants to destroy the opposition in the 2023 election. In the interim, Mwonzora is enjoying the manipulation of the governance processes by Zanu PF.

“The moratorium to hold by-elections imposed by the Zanu PF led government under the guise of unfavourable conditions due to the prevalence of the Covid-19 pandemic is partly designed to benefit Mwonzora in the interim,” says Mabhachi.

Sibanda adds that the ruling party Zanu PF is working with Mwonzora to destroy the MDC Alliance.

“Zanu PF is afraid of the people, with whom Chamisa is endeared.”

“We know where Mwonzora stands politically, we found out as early as August 2018 that there was a 6-million-dollar plan to do this kind of thing,” he says.

The next stage in the legal fights between opposition factions could be critical for the future of democratic politics in Zimbabwe and any prospect of holding credible elections.