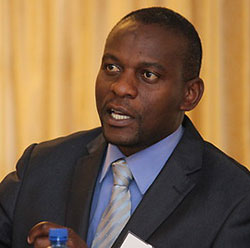 Chinamasa has also exposed the government’s desperation to find other new sources of revenue in the face of an imploding economy by announcing new steep fines for various traffic offences.
The new traffic fines will worsen corruption as very few people can afford to pay the $100 spot fines that have been introduced for various offences.Advertisement

Zimbabwe is in the middle of a recession which has been the case since 2012.  This recession is characterised by weak aggregate demand, deflation and contracting of the economy.
That recession has resulted in government failing on its public service obligations.
For the first time in history, the government has failed to pay the civil servants their 2015 annual bonus and December salaries. Civil servants experienced their bleakest Christmas in recent memory.
Where an economy is in a recession, a decent government promotes growth and aggregate demand.  Under these circumstances taxes and interest rates must be lowered to countenance disinflationary trends in the markets.
However, this illiterate government is trying to do the opposite.
By increasing taxes and failing to honour salaries and bonuses to civil servants, the clueless Zanu PF government is deepening the hole that the country finds itself in.
The truth of the matter is that Robert Mugabe and Zanu PF have failed in absolute terms and must resign.
The year 2016 will be a decisive year for the processes of achieving democracy and restoring the economy.
Therefore, it is important for all the progressive opposition political parties to find a formula of working together in order to achieve a better and prosperous Zimbabwe for all.
This cursed government cannot be allowed to continue abusing us the suffering citizens.
Surely Another Zimbabwe is Possible!!!
Settlement Chikwinya is PDP Acting Secretary for Economic Affairs