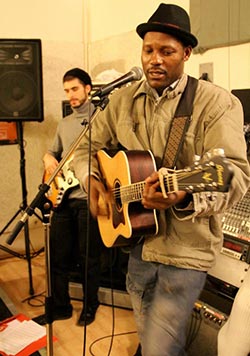 BULAWAYO’s premiere spring festival, Intwasa Arts Festival kicks off Monday with exciting performances lined-up.
The week-long festival, now in its 11th edition, will see over 50 events staged in six venues featuring some of the country’s top acts.
Themed, “My Intwasa, Your Intwasa, Our Intwasa,” the festival will run until September 26.
The official opening has been set for September 22, with Zimbabwe’s comeback music duo Afrika Revenge set to light up the stage and set the tone for the rest of the festival.
Another highlight in this year’s edition is Zimbabwe’s self-styled king of dancehall, Winky D, who will perform at the Celebrate Bulawayo concert on September 25 at the Large City Hall.
Other musicians who will perform throughout the festival include Jeys Marabini, Diana Samkange, Tariro neGitare, Ndux Junior, Clement Magwaza, and Martin and Ndolwane Super Sounds.
On the theatre stage, Without A Name, an adaptation from Yvonne Vera’s novel of the same title, has created a buzz and is set to attract a large audience.
The Live literature programme is jam-packed with exciting plays such as Colour of Hope, Master Harold and The Boys, Importance of Being Enerst and The Sun Will Rise Again.
The Intwasa Fashion Show has also become another important and popular event at the festival.
This year’s edition will feature ten regional designers and three special collections by the Bulawayo Polytechnic Applied Art School, The Heralds by Ara Kani and the Edgars Attaches collection.
In an interview with NewZimbabwe.com, festival director Raisedon Baya said all was set for this year’s festival.
“We are ready, under the circumstances. One can never be hundred percent ready. The economy is tough, we got to do with what resources we have, we cannot always have the best,” said Baya.
Baya urged festival goers to appreciate the various performances that will be staged.
“The festival is always about diversity, diversity of cultures, diversity of stories, diversity of tastes, diversity of creativity.
“Festival goers must learn the importance of tolerance of that which is strange to them or not their taste,” he said.
Baya urged Bulawayo residents to come out in their thousands and support the event.Advertisement