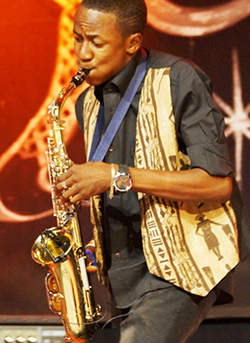 IT may be a cold wintry summer day as the rains beckon and the chill sets in, but as he walks onto the stage and breathes life into the saxophone, the icicles thaw and the sharp sound of musical mastery and saxophone precision tears through the cold blanket and warms the enthusiastic crowd.
Suddenly, the roof is on fire as the large bags of lungs he no doubt conceals beneath his chest and torso let out hot scorching wind into the saxophone while his long disciplined fingers tame the pad cups of shiny golden-brassy instrument.
Osborne Matenganzara, the much toured and celebrated present and future of the wind instruments, particularly the sax, holds his own on the stage with relative ease, like he has done a thousand times before; like he will no doubt do a million more times ahead. His repertoire will go on.
And yet this master of the saxophone and celebrated young artiste, who now stands like a god of the wind instruments in the pantheon of gods, was but a mere less-than-mortal and weak earthling.
That was before he accidentally stumbling onto what is now the basis of his survival and crux of his being a musical cause celebre and potential immortal in the musical Hall of Fame in Zimbabwe.
“It was when I attended Prince Edward School that I tried my hand at the saxophone,” says the full of life Osborne.
But it was in the unlikeliest of fashion, he is quick to add.
“We were expected to, at least, do some extra-curricular activity. Take on something or a sport and, because I was very tiny, I decided sport was not for me and so I chose music instead,” he says.
And when he was running away from anything that needed him to be big, the irony becomes how he became a towering Collosal figure in music in the long run, although he remains humble and downplays his artistic prowess.
As part of the group Jam Signal, Osborne and his crew have become regulars at the Book Cafe in Harare where they have now drawn a large following and also mesmerised the Wafest Concert attendees recently alongside fast rising musician Eve Kawadza.
“I have toured with a number of outfits all over the world,” says the former Umoja saxophonist.Advertisement

But even landing the coveted spot in Umoja, one of the region’s biggest bands, does not elicit pride or vanity from the modest Osborne.
“I landed Umoja but that year I was the only saxophonist to audition and I got the spot. I always felt it didn’t really mean I am that good but rather that it was because I was the only one there!” he insists modestly.
Yet the world of the arts is full of his praises. From artistes such as the renowned Hope Masike and Eve Kawadza who have managed to rope him in, to music critics and connoisseurs.
This saxophonist has become the biggest protege-turned-guru of the wind instruments after the untimely and premature demise of Sam Mtukudzi, himself a former Prince Edward band product.
Even the nation’s foremost sound guru Vusa Moyo agrees that working with Osborne’s sound is but a stroll in the park for his precision, artistic dexterity and his technique.
And much like the pied piper of Hamelin, who, through his wind instrument, enchanted an entire town of children to follow him and his music, Osborne Matenganzara is definitely the supreme name in jazz and contemporary saxophonic genius in Zimbabwe and may well be our answer to good ole Louis Satchmo Armstrong as we follow his good skill wherever he plays!