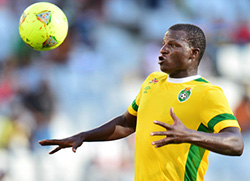 AS Vita utility man Oscar Machapa says they are geared up for the visit of Mamelodi Sundowns on Sunday in what promises to be an explosive CAF Champions League second round, first leg tie.
The DR Congo champions will be hoping for a favourable result at Stade Tata Raphael before they travel for the return leg in Tshwane on April 19 in a contest that will determine who moves on to the group stages of the continent’s premier club competition.
Machapa, who played for Moroka Swallows from 2010 to 2013, says his teammates know what Sundowns have to offer as they all follow the Absa Premiership.
“We are all good and everyone is looking forward to the game on Sunday. We hope we will get a good result in this game,” Machapa tells KickOff.com from his base in Kinshasa.
The 28-year-old Zimbabwean started at right-back in the two legs of the previous round against Ferroviario de Maputo, while he played as a holding midfielder in the earlier round against Mafunzo of Zanzibar.
Machapa is well informed about The Brazilians who have his former teammate Khama Billiat in their ranks, along with another countryman Cuthbert Malajila. Machapa played with Billiat at Zimbabwean club CAPS United just prior to the two players moving to South Africa.
“My teammates all know about Sundowns because they all follow the South African league,” Machapa says while noting that they have minor knocks in their camp.
A full house is expected at the 50 000-seater stadium in the fifth meeting between the two clubs in African competitions.
The Brazilians have lost on both of their last two visits to the Congolese capital – going down 1-2 in a 1994 African Cup of Champions Clubs tie while they were downed by a solitary goal on their last trip there seven years ago.Advertisement