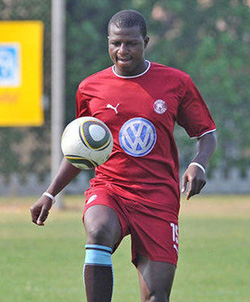 OSCAR Machapa believes Harare giants Caps United can win the championship this term following a brilliant run which has seen them among the top three as the league battle staggers into the second half.
The former Caps United utility man who can play either as a defender or a midfielder, is now plying his trade in the Democratic Republic of Congo (DRC) on the books of Kinshasa giants AS Vita who singed from the Green Machine in August last year.
He is currently on an offseason break and, on Monday, paid a courtesy call at the National Sports Stadium as his former club prepared for Wednesday’s league clash against Tsholotsho.
Machapa still has the emotional attachment to the club which groomed him since he started off his career as a spiky haired teen.
And he expressed satisfaction with the progress United have made since Lloyd Chitembwe took over when he left for DRC.
Machapa said the Green Machine had the strongest squad in the league, brimming in quality which had the potential to win the championship for the first time since they won back-to-back league titles in 2004 and 2005 under Charles Mhlauri.
While admitting that there was stiff competition in the league, he said he was putting his money on United winning the championship.
“So far so good; I think I am happy with the way they are playing even though there are some games they must collect maximum points but are only getting a point,” he said.
“They are contenders to be the champions of Zimbabwe and I am putting my money on Caps United this season.
“But the league is tense; there are no small teams anymore. Every team is pushing hard; even when the so-called small teams play against each other or against the bigger teams.
“They are all pushing hard and what our game needs now is just sponsorship to be able to compete in Africa.”
The former Moroka Swallows defender added:” I think, when I look at Caps United, they have a strong squad in the premiership.
“They have got balance and for all their thirty registered players anyone can play so they don’t have to worry much when one player is injured or suspended.
“They can go all the way and win the championship.”
The Harare giants are in third place on the league table with 26 points, three behind leaders FC Platinum who however, still have a game in hand.Advertisement

Highlanders are in second place with the same number of points but have a superior goal difference.
Should Caps United win their clash against Tsholotsho at the National Sports Stadium Wednesday, it will help them keep the leading pack in check.