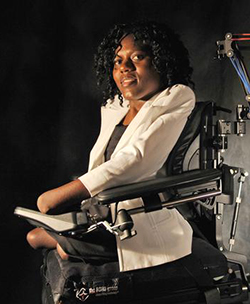 SINGER and songwriter Prudence Mabhena, who starred in an Oscar-winning documentary about her life as a person who triumphed over her disability, has been appointed as an ambassador for South Africa’s Casual Day project.
Music by Mabhena won the 2010 Academy Award for Best Short Documentary. The documentary tells the uplifting story of this Zimbabwean songbird and follows her remarkable journey out of hatred and superstition into one of music, love and possibilities.
Persons with disabilities experience discrimination in so many ways and her story is inspiring to everyone who hears it.
Mabhena was appointed as an ambassador because she can carry the message of Casual Day to a wide audience. She was born in Zimbabwe and was in South Africa recently taking a stand against xenophobia.
Casual Day believes it is appropriate that the disability community take a stand against xenophobia and in favour of diversity.
Mabhena was born with arthrogryposis, a condition that deforms the joints; it has cost her both of her legs, and makes it difficult for her to use her arms.
When she was born, her father’s mother advised her mother not to nurse her. After her parents abandoned her, she was cared for by her maternal grandmother, a rural farmer who kept Mabhena at her side as she worked.
But she went on the form a band and is now not only an internationally recognised singer; she is also a Unicef ambassador.
The story does have a happy ending: when she made her homecoming after the trip to the Oscar ceremony, there were hundreds of people waiting at the airport.
As she was carried off the plane, at the foot of the stairs was her father — on his knees, tears streaming down his face, begging her for forgiveness.

Mabhena uses her music to break down barriers and bring her message of hope to the world.
“Everyone listens to music,” she says.
“I think messages sent out through music will be effective and can encourage immediate responses.”
The Casual Day theme for 2015 is Spring into Action and Mabena will be recording the first official Casual Day theme song in June.
It was composed by herself and her musical partner Bozoe Nkomo. Listen out for the song, which will also feature Casual Day ambassador and rapper Tujay Harmonix.Advertisement

Casual Day is the flagship project of the National Council for Persons with Physical Disabilities in South Africa (NCPPDSA), which also runs its national projects from Edenvale.
Since 1995 Casual Day has made it possible for the NCPPDSA fulfil its mandate of creating a fully accessible and inclusive society for all, raising R220-million.
The money benefits thousands of persons with disabilities through the branches of beneficiary organisations in every region.
Casual Day’s aim this year is to spread the message of the social impact of the funds.
The Your R10 in Action campaign will highlight where the Casual Day money is spent. Schools and organisations use the funds for a range of different things, including transport, assistive devices and awareness campaigns to inform communities about disability.