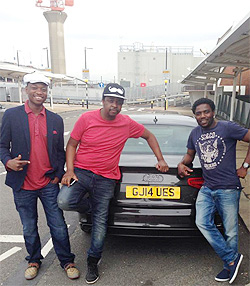 SOUTH African DJ and hitmaker Oscar ‘Oskido’ Mdlongwa arrived in England on Friday morning ahead of three weekend gigs in London, Bolton and Dublin, Republic of Ireland.
The Kalawa Jazmee boss told New Zimbabwe.com he was looking forward to the gigs, promising to showcase all the future hits from his label due for release this summer.
“We’ve a new Trompies album, Professor is in the studio, Uhuru are in the studio, Mafikizolo have some new stuff out, Heavy K is always in the studio and I’ve not been on holiday either.
“So I’ve a lot of super rocking tunes to share with our UK and Ireland fans who have always been very supportive,” Mdlongwa said from Heathrow Airport.
Getting Oskido to travel to the UK was a major coup for the promoters, with the house music and kwaito hitmaker currently busy with auditions for X Factor SA for which he is a judge, alongside his protégé Zonke and rock singer, Arno Carstens.
He said: “We started filming auditions for X Factor last month and the show is gonna be huge, if the numbers we have seen are anything to go by. It’s a really exciting time.”
WHERE TO CATCH OSKIDO:
Friday, August 1: CLUB SWAGGA , 27 BROADWAY, STRATFORD
Saturday, August 2:  SOUND HOUSE , BOLTON , ASH STREET
Sunday, Augst 3: PASSION NITECLUB @ RIVER BAR, 1 BURGH QUAY, O’CONNELL BRIDGE HOUSE, DUBLIN 1
For more information call +447939981758