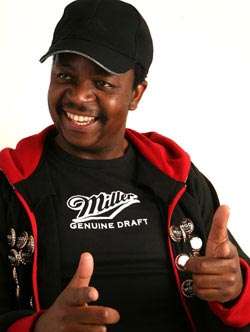 Oscar Mdlongwa aka Oskido opens up about his transition from car-boot cassette salesman to music mogul
HIS marketing savvy is brilliant and business acumen exceptional. Oskido as he is fondly known in the industry, has carved out a successful career in the spotlight by building a multi-million-rand brand and record label.
Now 47, Oscar came to Johannesburg as a young man. Despite being barely 20, he already knew what he wanted to do and was intent on cracking the music industry. It had been a lifelong dream.
He recalls his mother telling him that when she listened to music while pregnant with him he would kick when he heard a beat. At school he played around with music and had his own cassette collection.
Born in Zimbabwe, Oscar often visited Brits in the North West province. By the time he became a regular on the Hillbrow scene, selling boerewors rolls outside clubs at first and then managing a club, he had become a fully-fledged SA resident.
While running the now-defunct club Arena, Oscar heard two girls singing and dancing. They were 15 at the time, and lively entertainers. Amazed at their vibrant personalities and confidence, Oscar immediately saw their potential and realised they were budding stars.
Discovering Boom Shaka
He approached the girls and Boom Shaka was born. Oscar would spend the next year developing the group and marketing them extensively, and in a way that was considered unorthodox. He sold Boom Shaka’s debut cassettes from the boot of his car.
“With members of the old ANC Youth League – people like Peter Mokaba, Malusi Gigaba and Fikile Mbalula, we would go to taxi ranks and gigs and play their music whilst rallies were on there. Those youth league members gave us an opportunity to market ourselves,” recalls Oscar.
Boom Shaka – It’s about time