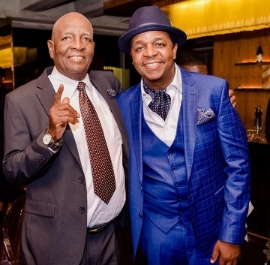 Mdlongwa, who is also father to popular South African based musician, Oscar “Oskido” Mdlongwa died at the age of 73 at a Bulawayo private hospital after succumbing to Covid-19

“It’s with great sadness to let you know that I have lost my old man due to COVID-19, a great man who inspired me to understand the value of life. So long Mdala, rest well, I will see you again in the next lifetime. You’ve showed us a way and shone the light, Akwehlanga lungehlanga,” he said.

Part of the people who consoled the legendary musician include a Nkululeko Sibanda who narrated his relationship with the late Mdlongwa.

“Phepha mkhaya (I’m sorry brother). Your old man held my hand in my most difficult moment when Gibson passed on. I will never forget that.

“I am sure he is now joined with his Union friends and they will continue fighting for us. My prayers for his soul and all you guys. You are not alone,” said Sibanda.