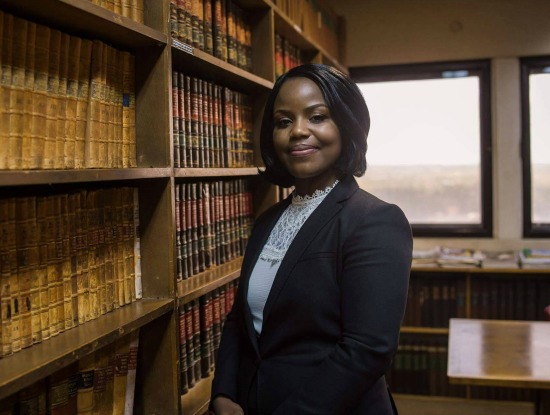 HARARE lawyer and pro-democracy activist Fadzayi Mahere has scorned ousted President Robert Mugabe and his apologists’ claims the long serving leader was unconstitutionally removed from office by the military.

Mahere, who was speaking during a panel discussion at SAPES Trust this past week, said Mugabe should instead be introspecting about his own misdeeds that saw a military establishment he was once so cosy with turn around to give a fatal punch to his long political career.

Mugabe was in November last year ousted in a popular coup that saw citizens invade the streets to celebrate his fall.

The former President broke his silence a few weeks ago, describing his removal as unlawful.

Mugabe accused the military of taking sides in Zanu PF factional wars which saw then Vice President Emmerson Mnangagwa reinstated and installed as President, few days after Mugabe had fired him on alleged treachery.

At the time, Mugabe seemed determined to get rid of Mnangagwa so as to install his wife Grace in the position of VP and possibly President.

Since the time, Mugabe, assisted by his aides, has been all out to alert those who cared to listen of the unconstitutionality of his exit, something Mahere felt was paradoxical for a one time powerful leader who had been cosy with military political interference when it suited him.

“It’s a myth that the military took over Zanu PF in 2017, the military has always been in bed with Zanu PF that is why in 2008 they held another gun to Mugabe to say you are not going anywhere and it seemed not to raise these arguments at that time,” she said.

Mahere was referring to the March 2008 Presidential election whose results were withheld for almost a month with strong suspicions the Zanu PF dominated system was tampering with the outcome to deny then opposition leader Morgan Tsvangirai a clear victory.

There were also strong reports Mugabe had resigned himself to his defeat but was forced to stay put by a partisan military that feared an opposition rule.

What emerged later was a result that showed Tsvangirai fell short of the 50 percent plus threshold to avoid a run-off poll.

The now late opposition leader was forced to pull out of the re-run which Mugabe contested and won unopposed.

Prior to the election, the country’s military declared it was never going to countenance a Tsvangirai victory insisting he was not deserving of the country’s top job as he lacked liberation war credentials.

The military hand was evident in the run-off election when some 200 MDC-T supporters were allegedly lynched in the villages by the military and militant Mugabe followers for voting against their leader.

During the policy dialogue discussion, National Patriotic Front spokesperson Jealousy Mawarire was up in arms with a “junta” he said subverted the constitution in overthrowing a popularly elected Mugabe.

Mahere said Mugabe and his apologists had no moral authority to cry foul when they were quiet when their leader created a monster that turned around to devour him.

“The suggestion there seems to be that Mugabe is happy for the army to participate in electoral and political processes for as long as they like him but until the moment they fall out it’s now a coup, it’s now unconstitutional, its now problematic.

“You recall that in 2008 when (then South African President) Mbeki came and the people had spoken and voted in support of Morgan Tsvangirai and there was really a crisis Thabo Mbeki came in and said there is no crisis in Zimbabwe.

“So we are not going to have that same SADC come and say Mugabe is right whenever he violates people’s rights when he jailed them and they are quite and they don’t speak to the unconstitutionality of that. You can’t choose which parts of the constitution you like.”