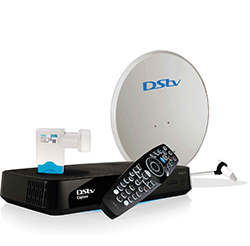 DSTV viewers in Zimbabwe have reacted angrily to a steep hike in commission for subscriptions at NMB Bank, from $2 to $5, describing it as day-light robbery.
This comes amid revelations the Econet Wireless-owned Steward Bank has also suspended payments for the DSTV, citing cash shortages. The satellite broadcaster is owned by South Africa-based MultiChoice.
Steward Bank said in a statement Monday that it was suspending payments for all DSTV accounts, except the premium bouquet, which has very few subscribers owing to its high costs.
“To assist in effective allocation of foreign currency reserves at this critical time, we would like to advise that with immediate effect, the bank has suspended DSTV (digital satellite television) payments for all account classes (except premium),” the bank said.
The suspension of DSTV payments by Steward Bank gave NMB the monopoly of accepting payments for the most popular pay TV service in Zimbabwe.
But it was the increase in the commission by NMB bank which riled subscribers, with those who spoke to New Zimbabwe.com saying the hike, effective last Tuesday afternoon, was unjustified.
“Why do we have to pay extra money as if there has been any improvement in the service rendered by the bank?
“We spend hours on end here to pay our subscriptions and for that we are asked to fork out extra cash,” fumed one woman at NMB Avondale branch who spoke on condition of anonymity.
Another subscriber, Kumbulani Ncube, said NMB Bank was taking advantage of people’s desperation to rip them off of their hard-earned cash, adding the charges were way above the stipulated charges for any bank transactions.
“I thought that someone is charged according to the amount of transaction they did, but in this case, a person paying for an $11 bouquet is being charged the same commission as someone paying for an $80 bouquet. This is daylight robbery,” he said.
Ncube said NMB Bank should be investigated for unfair profiteering.
Another subscriber who spoke on condition of anonymity blamed DSTV for the developments, saying the company should allow subscribers to pay using cash in at its banking halls instead of having them go through third parties who were taking advantage of them.
“Why do they not accept cash in their banking halls? They are in this together, working with this bank to rip us of our hard-earned cash. I am sure they are also getting a chunk from the commission being charged by this bank,” she said.Advertisement

She expressed suspicion that this was the reason why the company had stopped payments through other banks and other channels such as EcoCash, which were far more convenient and cost effective.
NMB Bank management were not available for comment.
Multi-Choice Public Relations Manager, Liz Dziva described the increases as regrettable but noted that the company had no say in the commission charged by financial institutions.
She said decisions made by the financial institutions regarding DSTV payments were beyond the control of MultiChoice Zimbabwe, adding that the company engaged the banks from time to time in the hope of influencing and encouraging them to provide services that were easy and accessible to DSTV customers.
“Financial institutions charge a commission for this service, the level of which is entirely their own decision and this commission is entirely to cover their own costs. It is most certainly not shared with MultiChoice,” she said.