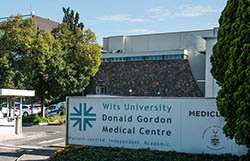 A HOSPITAL staffer suspected to have circulated a picture of then hospitalised and now late MDC-T leader Morgan Tsvangirai could be in hot water after outraged Zimbabweans wrote to the South African Nursing Council (SANC) demanding action.
The image which was supposedly taken at Johannesburg’s Wits Gordon Hospital where Tsvangirai was hospitalised shows the MDC-T leader lying seemingly lifeless as a nurse appears to pose for the camera.
In a complaint to the SANC) one S Masawi, a registered nurse, demanded that the nurse be charged with misconduct.
“May l bring to your attention the attached image showing one of your Nurses posing for a picture with a patient who is clearly on his final days.
“The patient is a well know Zimbabwean politician Mr Morgan Tsvangirai who passed away today (Wednesday) 14 Feb 2018 at the well-known hospital in Africa WDGMC (Wits Gordon, South African Hospital),” Masawi said.
“I am a fellow registered nurse myself and, sadly, l find the actions of your staff member, a fellow professional colleague to be grossly inappropriate, unprofessional and in breach of the Nursing profession’s code of conduct.
“l would like to assume a breach in the local hospital policies as well.”
Masawi added that, it had become public knowledge that Tsvangirai was battling colon cancer in the past two years and his situation had taken a turn for the worst in the past few weeks, adding that action against the nurse is required “against such images for personal gratification and to uphold his right to personal dignity.”
“l would be grateful if you could investigate this case of unprofessionalism and perhaps we can all learn from this.
“I would not want to assume such behaviours are acceptable under the SA Nursing council. The image is likely to go viral on social media over the coming few days so perhaps an earlier response may be called for.
“SA Nursing Council is well respected for its excellence in standards of training and conduct and so producing some pf the best nurses and healthcare practitioners out there.”
Another concerned health care professional who signed of as Kathryn also expressed disgust at the picture in a letter to the SANC.
“I am a concerned African who also happens to be a proud health care professional. I am writing to bring to your attention a picture circulating on social media showing a clearly unwell possibly on death bed the late Morgan Tsvangirai with a lady wearing a nurse’s uniform.Advertisement

“Now I do not want to jump to the conclusion that this lady was the one who took or is circulating this very unprofessional picture.  But it would make me have respect for both your organizations if an investigation was launched into this matter,” Kathryn said.
“Am not sure what part of the world this would be acceptable let alone in Africa with our ‘ubunthu’. If indeed this lady is a qualified nurse privately employed or working for your hospital/clinic I would like to ask that you investigate this issue.
“Perhaps she needs direction and refresher lessons into professional conduct expected from this profession”.