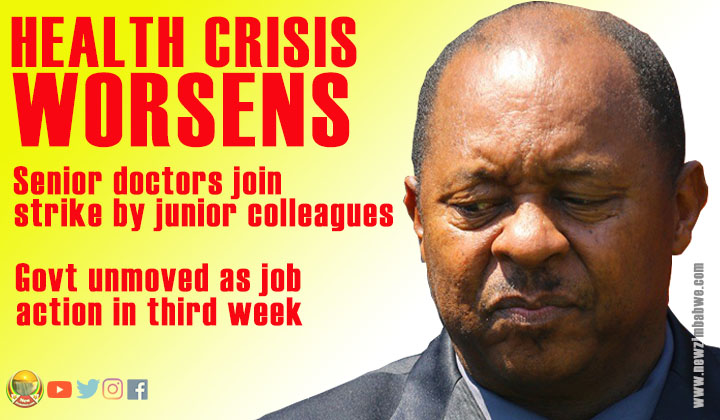 THE crisis in Zimbabwe’s public health sector is set to worsen this week after some senior doctors indicated they are joining junior colleagues in job action that started more than fortnight ago.

In a letter seen by NewZimbabwe.com addressed to the Clinical Director at Parirenyatwa Group of Hospitals, the senior doctors they could no longer cope with the increased workload created by the absence of their juniors.

“Due to the ongoing industrial action by our junior colleagues, we as the Registrars are now overwhelmed by the workload and we are now unable to effectively discharge our services,” reads the letter in part.

“We are therefore withdrawing our services with immediate effect. We hope the situation will be resolved expeditiously so that we may resume providing services normally and effectively.”

Government-employed junior doctors went on strike, demanding that the Mnangagwa administration pays their salaries in United States dollars as the surrogate Bond Notes and the RTGS currencies plummeted in value amid a deepening economic crisis.

The general practitioners are also demanding that government addresses the availability of critical medicines as well as medical and sanitary sundries, claiming they are, for instance, being forced to resort to the use of condoms as protective gloves due to acute shortages.

With the country reeling from foreign currency shortages, the government, has ruled out payment of salaries in US dollars, saying the available funds are better spent on importing medicines.

The doctors have conceded the position but they are refusing to budge on other demands.

“We looked at the initial demands by junior doctors that they wanted their salary pegged in US dollars, the whole of it but obviously through the negotiations, discussions and insights which we have made with our parent ministry, it was very clear that given our economic situation in the country that is not practical.”

The junior doctors have rejected appeals by the government to return to work, demanding firm guarantees regarding promises made by the administration during negotiations last week.

“The issues of doctors’ welfare are still pertinent…senior doctors have already highlighted their intent to join the industrial action.That is why we are saying it is important for us to go and consult our constituency.”

The doctors’ strike has increased pressure on the Mnangagwa government at a time teachers are also warning that schools won’t open for the term next year unless the administration pays their salaries in US dollars.