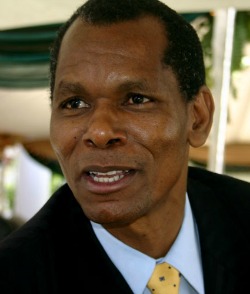 A CABINET minister said Thursday he has not finalised plans to force foreign banks, including Barclays and Standard Chartered, to sell majority stakes in their local units to black Zimbabweans.
“I am still working on what needs to be done and how it will be done,” Indigenisation Minister Francis Nhema said. “Nothing has been finalised as to the compliance issues.”
Nhema said he plans to meet with foreign banks, which under the country’s law must sell or cede 51 percent of their operations to black Zimbabweans or the state-owned National Indigenization and Economic Empowerment Board.
Foreign-owned lenders won’t immediately be asked to comply with that law, the state-run Herald reported earlier today, citing the minister.
Barclays, Standard Chartered and the local units of South Africa’s Standard Bank Group and Nedbank Group have all submitted proposals to comply with the law.
Central Bank Governor Gideon Gono said in May that the plans to force systemically important foreign banks to sell majority stakes to black Zimbabweans were “uninformed.”Advertisement