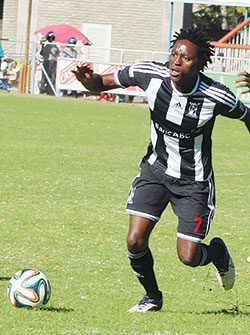 THE Castle Lager Premier Soccer League returns this weekend for its 10th round of matches with a blockbuster match between leaders Highlanders and FC Platinum at Barbourfields Stadium on Sunday.
The league had taken a break to accommodate the Warriors-Tanzania 2015 Africa Cup of Nations first round, second leg qualifier which ended in heartbreak for Zimbabwe after the national side was knocked out 3-2 on aggregate after a 2-2 home draw.
Highlanders lead the league table with 19 points from nine matches and have not lost to the Zvishavane-based side since 2012 in the league, although they have lost twice in cup competitions: the Independence Trophy semi-finals and the ZNA Charities Shield.
Platinum’s only victory came in 2011-their first year of promotion to the top flight. Since then, they have lost 1-0, 3-1, 1-0, drew 0-0 and lost 2-1.
In the close season, Platinum snapped up former Bosso striker Njabulo Ncube while the Bulawayo giants recruited Joel Ngodzo, Charles Sibanda and Welcome Ndiweni from the Zvishavane outfit.
From the trio, Sibanda has made the early impressions with a double two weeks ago that helped floor Buffaloes 3-1 at Sakubva.
Platinum boss Lloyd Mutasa will be however buoyed by the return to form of Allen Gahadzikwa while the likes of Nelson Maziwisa and Donald Ngoma have not hit the great heights of the last two seasons.
Thabani Kamusoko has been consistent in midfield, while left back Qadr Amin has returned from an 18 month lay-off with a band and has scored three goals this season.