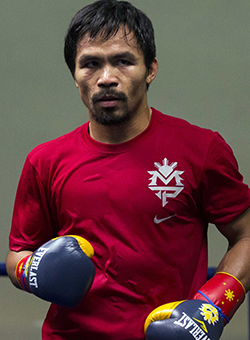 FILIPINO boxing hero Manny Pacquiao is confident he can beat American arch-rival Floyd Mayweather in Las Vegas on Saturday with the power of God, after abandoning a life he said was packed with sin condemning him to hell.
Pacquiao is in top form both in mind and spirit after he traded his boozing, gambling and womanising ways for a devout life of prayer, his spiritual adviser, Jeric Soriano, told AFP in a recent Manila interview.
“Manny is a God-fearing man. Inside his heart of hearts he really loved God. Except the world got to him,” Soriano said of Pacquiao’s party-boy lifestyle before he became born-again in 2012.
Pacquiao now dreams of becoming a pastor and is building a 6,000-square metre “worship house” in his southern Philippine hometown of General Santos as a monument to his spiritual rebirth, Soriano said.
With Soriano’s help, Pacquiao a few years ago converted to the born-again faith, which shuns many Catholic traditions such as religious images but emphasises strict adherence to the bible.
He is now building a church, to be called: “The Word for Everyone” and which can accommodate up 5,000 people, in his southern hometown of General Santos, pastor Boy Buan, who is overseeing the construction, told AFP.
‘I was a sinner’
In 2012, Pacquiao acknowledged he had succumbed to many of the temptations on offer to ultra-wealthy sportsmen, after the Philippine media for many years dined out on rumours of infidelity, drinking and gambling.
“I do realise I was a weak person before. If I had died the other year, I believe my soul would have ended in hell,” Pacquiao told reporters then.
“I had faith, but I was doing things which were against the will of God.”
In an interview with AFP last month before heading to the United States to train for this weekend’s Mayweather megafight — predicted to pull in around $400 million as the two best boxers of a generation finally go head-to-head after years of protracted on-off negotiations — Pacquiao again reflected on his earlier life.
“All the things I loved and wanted were the same things that were most detestable before the eyes of God. I was a sinner,” Pacquiao said.
Soriano said Pacquiao confided to him that he felt he was wasting his millions of dollars in boxing earnings on vices.Advertisement

“Why can’t I channel that instead to a church that will speak the word of God?” he recalled Pacquiao saying.
Tearful conversion
Like the prophets in the Old Testament, Pacquiao claimed God appeared to him in a dream, according to Soriano, a television commercial director who had worked with the boxer in the past.
“He was in a forest, a strong light hit him and pierced his body and he heard a voice asking him: Where are you? Why have you left me?” Soriano said.
Pacquiao was crying in his dream and he woke up with his pillow soaked in tears, and he was soon telling anyone who would listen the almighty joy of being a believer, he said.
Watercooler chats about fast cars with his staff then turned into bible studies as Pacquiao tried to infect them with his new-found faith, according to Soriano.
“They say he’s fast in the ring. But when he received Jesus Christ, there was also speed in his (spiritual) growth. He has this hunger to know Jesus,” he said.
The conversion also played a crucial role in saving his marriage to wife Jinkee with whom he now has five children, according to Soriano.
Soriano said he became convinced Pacquiao the bible man was the real deal when he held on to his faith even after he suffered a crushing defeat to Timothy Bradley in 2012.
“He got it. He didn’t throw Jesus away. He didn’t see Jesus as a lucky charm. I knew it was real,” Soriano said.
‘God will bless me’
A few weeks ago, Soriano said he got a phone call from Pacquiao at 2:30am in Manila.
It was the afternoon in the boxing legend? Los Angeles training camp.
“He said, pastor how are you? I am not worried. I am not stressed in this fight. God will bless me with favour. Victory belongs to us,” Soriano said.
Publicly, Pacquiao has also been just as confident that God will help him defeat Mayweather.
“The Lord, my God that I am serving will deliver him into my hands,” Pacquiao said on Twitter.