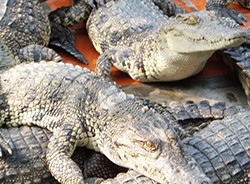 CROCODILE breeder Padenga Holdings on Thursday reported an operating loss of $2,5 million in the six months to June citing disruptions in its operations over animal cruelty claims.
The company, which provides French based luxury bag maker Hermes with alligator and crocodile skins, earlier this year came under the spotlight with animal rights activists claiming the animals were not always treated or slaughtered humanely.
In a statement accompanying company results on Thursday chairman, Kenneth Calder, said operations were seriously disrupted by unexpected and intense inspections by the statutory authorities.
The charge was subsequently dismissed.
“For the alligator business, there were disturbances to production which will impact on the value of skins sold in 2015.
“We therefore anticipate this operation will only break even in the current year, but expect to return to normal high quality skins production in 2016,” Calder said.
Revenue in the half was down to $4,3 million from $4,7 million last year.
During the period 9,144 skins were sold compared to 9,299 last year.
The Zimbabwe crocodile operation achieved an operating loss of $2,3 million compared to $2,4 million last year although revenue increased by three percent to $4,2 million.
The number of skins sold was higher at 8,895 from 7,467.
Padenga’s alligator operation  in Texas, United States, recorded revenue of $79,789 compared to $646,550 with no sales.Advertisement