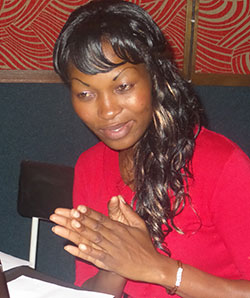 FORMER Miss Tourism Masvingo, Gayly Mhonderwa, has lined up a beauty pageant aimed at raising funds to buy sanitary ware for girls and women staying at Chingwizi holding camp in Mwenezi.
Some 14 models from Masvingo province are expected to contest at the event which will support victims of the Tokwe Mukosi Dam floods.
“All set to crown Miss Tokwe, currently we are seeking donations from various cooperates and individuals to add with proceeds we will realise from the event so that we can be able to help as many girls in the holding camp as possible.
“The crowned model will hand over the donations to the affected women,” Mhonderwa said.
She said that her ambition was to make the pageant a national event but lamented the lack of sponsorship.
After the end of her reign in 2008, the former beauty queen formed her own modelling agency, MGM beauty pageant collections, where she scouts and grooms girls into the modelling industry
She said her time as Miss Tourism Masvingo made her appreciate the importance of charity work.
“During my reign as Miss Tourism Masvingo, I was supposed to do a lot of charity work and that made me understand what it meant to help others,” she said.
To date, her company has managed to host a pageant for orphans, old people and the disabled, with her models donating various foodstuffs and clothing to Mucheke Old People’s home as well as Alpha cottages for orphans.
She has also done a number of charity activities within Masvingo.
“It’s just a way of me being a woman trying to extend a helping hand to other women, and it’s my hope that the event will generate enough donations for every women staying in the camp since we will be donating items that most women can’t do without,” she said.Advertisement