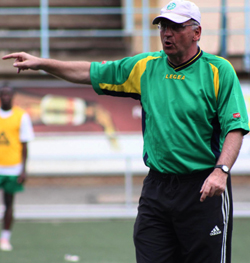 WARRIORS coach Klaus Dieter Pagels is confident his men will make their mark when they start the defence of the Cosafa Castle Cup against Malawi in a quarterfinal tie at the Nkoloma Stadium in Lusaka, Zambia, on Saturday.
Since taking over from Rahman Gumbo, Pagels is yet to win a competitive match and this remains his best chance to leave Zimbabwe on a high.
Pagels had a full complement of players on Tuesday at the National Sports Stadium in Harare as training began in earnest ahead of Thursday’s road trip to Lusaka.
“I have watched a lot of these boys in action for their clubs this season and this is the best we could come up with. Remember some of them like Felix (Chindungwe) and Ronald (Chitiyo) even played for the senior team in the World Cup qualifiers. So that has given then some experience,” Pagels told reporters.
“We are going there with a positive mind. You could see the enthusiasm from the boys from the sessions we have had today and I am sure, we will fare much better.
“I’m not looking at how Malawi played against us last time and on Saturday against Mozambique, but how our own preparations are shaping up.”
The Warriors drew 1-1 in an international friendly with the Malawians in May where the likes of Chindungwe, Chitiyo, Masimba Mambare, Hardlife Zvirekwi, Silas Songani and Ocean Mushure took part.
Last Saturday, Malawi lost 1-0 to Mozambique in a friendly.
The Premier League’s leading scorer, Chicken Inn’s Tendai Ndoro, who has scored 11 goals in 16 matches, is expected to lead the Zimbabwe attack, together with How Mine hitman Simba Sithole and Monomotapa talisman Ronald Chitiyo.
Back in the squad is CAPS United goalkeeper Tafadzwa Dube after almost a three-year absence together with his former teammate at FC Platinum, Charles Sibanda.
Zimbabwe’s participation in the regional championships will not affect the local Premiership as the coaches have only picked two players from each team. A team can have its games cancelled if they have three or more players on international duty.
Goalkeepers: Maxwell Nyamupangedengu (Harare City), Munyaradzi Diya (Highlanders), Tafadzwa Dube (Caps United)
Defenders: Hardlife Zvirekwi (Caps United), Felix Chindungwe (Chicken Inn), Ocean Mushure (Dynamos), Eric Chipeta (Hwange), Nicholas Guyo (Monomotapa), Prosper Matizanadzo (Buffaloes)Advertisement