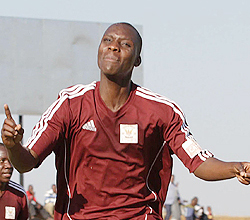 WARRIORS coach Klaus Dieter Pagels has named an 18-man squad comprising rookies to face Zambia in an international friendly match in Lusaka on Sunday.
Zambia is marking 20 years since the April 27, 1993, plane disaster off the coast of Gabon which killed all 18 national team players, two coaches, a doctor, two Football Association officials, a journalist and five crew members.
Pagels is taking on his third assignment after leading Zimbabwe to a 2-1 win against Botswana in an international friendly in February, before narrowly losing 2-1 away to Egypt in a 2014 World Cup qualifier last month.
FC Platinum striker Nelson Mazivisa – last year’s Golden Boot winner – and Chicken Inn captain Felix Chindungwe will be the notable stars in the team travelling to Lusaka.
FC Platinum defender Kevin Moyo has also been called up along with Chicken Inn goalkeeper Liberty Chirava, CAPS United striker Tawanda Nyamandwe, Motor Action defender Godfrey Moyo and Eric Chipeta of Hwange.
Dynamos midfielder Devon Chafa and the Black Mambas pair of winger Nicholas Alifandika and striker Last Chibwiro also made the cut.
Warriors team manager Shariff Musa said the team would go into camp on Wednesday evening and train on Thursday before leaving for Zambia on Friday.
“They will have another day of training in Zambia on Saturday for the match which will be played on Sunday,” Mussa said.
Zimbabwe must brace for emotional scenes as Zambians remember their fallen stars who perished on their way to Senegal for a World Cup qualifier when their Air Force DHC-5D Buffalo crashed, just 120 seconds after takeoff from Libreville, the first of its two refuelling stops required to reach the 3,500 mile flight to Dakar.
Derby Makinka, who used to play in Zimbabwe for Darryn T, is one of the stars that perished in the disaster.
Pagels, who is rebuilding a new team, will use the friendly to identify promising players who can make a case for their inclusion in his strengthened squad for the African Nations Championships qualifiers to be hosted by South Africa.
At the Championships, Zimbabwe, who are seeded, will play the winner between Mauritius and Comoros in the first round of the qualifiers between June 21-23.
Zimbabwe Squad for Zambia Match