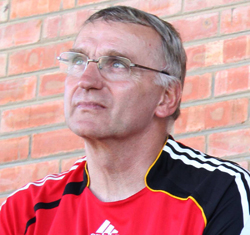 ZIMBABWE coach Klaus Dieter Pagels has warned his men of the threat posed by Guinea midfielder Ibrahim Traore who turns for Germany Bundesliga outfit VFB Stuttgart.
The Warriors, who fell 2-4 to Egypt at the National Sports Stadium on Sunday, leave for Conakry on Thursday for their dead rubber 2014 World Cup qualifier against the hosts on Sunday.
The German coach described the Guinea star as “dangerous in attack”.
“I don’t know much about Guinea but from their match against Mozambique I gathered that they played with three strikers. They also have Traore (Ibrahim) who plays for VFB Stuttgart and is very dangerous in attack. We need to defend well,” said Pagels.
Guinea demolished Mozambique 6-1 in their 2014 World Cup meeting in Conakry on Sunday with Traore one of the heroes in that comprehensive triumph.
Sadio Diallo and Mohamed Yattara scored a brace each with Mohammed Diarra and Traore weighing in with the other goals to ensure Egypt will have to wait a little longer before confirming their place in the final round of qualifying matches.
Meanwhile, the Warriors received a major boost on Thursday with top striker Knowledge Musona certified fit for the trip.
Pagels and his technical team have been fretting over the fitness of the Hoffenheim striker who sat out the training session on Tuesday with a hamstring injury. And Pagels was a relieved man on Wednesday after Musona was declared fit by the medical team.
Zimbabwe lost 1-2 to Egypt in Alexandria in March before they were hammered 4-2 at the National Sports Stadium in Harare on Sunday.
Musona scored in both matches.
“We have Musona who has been a doubt. He is fit now and we will have another training session where will work a little bit on the defence. And then I think we will be well prepared for this match,” said Pagels after the morning training session.
Zimbabwe are at the foot of the table in their group with just a single point in the campaign. Egypt lead the group with 12 points with Guinea on second position with seven points. Mozambique are third with two points.Advertisement