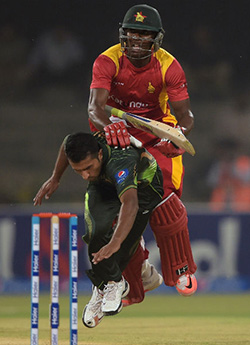 Pakistan 173 for 5 (Mukhtar 83, Shehzad 55) beat Zimbabwe 172 for 6 (Chigumbura 54, Sami 3-36) by five wickets
PAKISTAN marked the return of international cricket with a five-wicket win against Zimbabwe in the first Twenty20 on Friday.
Opening batsman Mukhtar Ahmed, playing in only his second T20 international, bludgeoned 83 off 45 balls as Pakistan reached 173-5 in 19.3 overs.
Zimbabwe captain Elton Chigumbura’s 54 off 34 balls had provided the visitors a decent 172-6.
A capacity crowd of 27,000 packed the Gaddafi Stadium for the first international match in Pakistan in six years, and was entertained by Ahmed, who hit 12 fours and three sixes.
“It’s a great occasion and the win has doubled the joy,” Pakistan captain Shahid Afridi said.
“With this match we have given a positive message to the world that Pakistan is a safe country.”
At least 4,000 policemen and paramilitaries guarded the stadium to avoid repeat of 2009 when gunmen attacked the Sri Lanka team bus.
The ambush had suspended international cricket in Pakistan until Zimbabwe cricketers volunteered to tour the country for two T20s and three ODIs.
“We gave away too many runs in the first six overs than we wanted,” Chigumbura said.
“They got 100 runs inside the first 12 overs and it made a big difference in the end.”
Ahmed shared a 142-run opening wicket stand with Ahmed Shehzad, who made 55.
Ahmed, who had made his debut against Bangladesh last month, brought the home fans on their feet by hitting fast bowler Christopher Mpofu for four successive boundaries in one over before taking three more boundaries off another medium pace bowler, Brian Vitori.

Zimbabwe hit back briefly when it got rid of both openers in the space of two runs.
Shehzad, playing his first international match at home since making his debut in 2009, played a lose cut off Sean Williams and was caught at point. Ahmed holed out at long on off Graeme Cremer while going for his fourth six.
Pakistan lost three more wickets in quick succession with Mohammad Hafeez (12), Umar Akmal (4) and Shoaib Malik (7) all perishing to poor shots before Afridi scored a winning boundary in the last over with a straight boundary off the first ball he faced.Advertisement

“Of course the win should have been by a bigger margin but you need entertainment in a Twenty20 which was there and it wasn’t a one-sided match,” Afridi said.
Earlier, after Zimbabwe won the toss and elected to bat first, Hamilton Masakadza (43) dominated the opening stand of 58 off 41 balls with Vusi Sibanda before fast bowler Mohammad Sami (3-36), playing his first Twenty20 after three years, removed both off successive deliveries.
Sibanda top edged a pull and was caught by wicketkeeper Sarfraz Ahmed and Masakadza played on the next delivery while going for a cover drive.
Chigumbura kept the scoring momentum going by hitting a career-best 54 off 35 balls with eight fours and a six before he was bowled by Wahab Riaz in the last over.
“Today it went Pakistan’s way, hopefully the next one goes our way,” Chigumbura said. “We have to make sure we are ready for positive result.”
The second T20 will be played on Sunday before the three-match ODI series begins Tuesday.