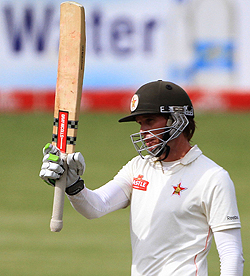 Pakistan 260 for 6 (Misbah 67, Shehzad 54, Chatara 3-48) beat Zimbabwe 152 (Waller 48, Ajmal 2-15, Rehman 2-23) by 108 runs
A LOT of expectations were heaped on Zimbabwe as they sat on the threshold of a rare series win against a top side, but they couldn’t summon the temperament to beat Pakistan, who came from behind to win the series 2-1 in Harare on Saturday.
While Zimbabwe’s bowlers did well to restrict Pakistan to a par score of 260, the batsmen failed to put up a fight. Pakistan, in the process got a bogey off their backs by winning their first bilateral series in ten years after the series was leveled (either 1-1 or 2-2) going in to the decider.
The match took place on the backdrop of a payments dispute that threatened a Zimbabwe boycott. The players put the distraction aside to take the field, but the batsmen were nowhere close to competitive despite encouraging signs even in Thursday’s defeat.
Brendan Taylor stuck by his faith that his side was better at chasing by putting Pakistan in to bat. The Pakistan openers, Nasir Jamshed and Ahmed Shehzad, put on their best stand of the series – 66 – to set the platform for another big score. Pakistan suffered a blow when their in-form batsman, Mohammad Hafeez, hobbled off with a hamstring pull on 12. Hafeez had been Pakistan’s attacking option at the top, but with him unavailable, it was down to Misbah-ul-Haq to shoulder the responsibility.
Shehzad couldn’t replicate the fluency from the two T20s but rather than hit his way into form, chose to play a steady knock. Jamshed’s dismissal impacted the run-rate as Pakistan struggled to find momentum in the middle overs. The boundaries had dried up and in the 32nd over, Shehzad broke a drought that lasted close to ten overs when he cut Sean Williams past the keeper. Shehzad consumed 81 balls for his fifty, showing the control the bowlers had over him. He perished trying to push on, lofting the part-timer Hamilton Masakadza straight to long-off.
Umar Amin batted positively in the batting Powerplay, taken after 35 overs, cutting and flicking Tendai Chatara for two boundaries in an over. He used his feet to Prosper Utseya, flicking him stylishly against the turn to deep midwicket and then over extra cover before the bowler struck back with a sharp return catch. Amin’s 25-ball 33 infused some life into the innings that was craving for acceleration.Advertisement

Misbah had plodded to 8 off 35 balls when he finally opened up, slogging Williams to deep midwicket to pick up his first boundary. He started to find the boundary regularly after the 43rd over, shuffling across his crease and punishing the length deliveries. With Sarfraz Ahmed showing some urgency, Pakistan scored their last fifty in just 28 balls. Misbah fell to a skier to deep midwicket after scoring his 11th half-century of the year. Hafeez returned in the penultimate over to salvage as many runs as possible and, fortunately for Pakistan, was swift between the wickets after resting his hamstring.
A total of 261 was competitive but Pakistan couldn’t afford to relax, having failed to defend 245 in the first ODI. They introduced spin as early as the second over and Hafeez struck when Vusi Sibanda slogged him to deep midwicket where Amin took a running catch. Masakadza, like he did in the second ODI, showed a lot of promise with a couple of jaw-dropping boundaries off the seamers. Using the crease, he effortlessly lofted Junaid Khan over his head and the following ball pulled a six over deep square leg.
Seeing Mazakadza’s confidence against pace, Misbah brought on Abdur Rehman’s spin the next over and he had immediate success, beating Masakadza in both flight and turn, and having him stumped. Zimbabwe struggled to get back the momentum gained via the Masakadza-Taylor stand. Taylor had his moments where he swept the spinners and found the gaps, and had it not been for the calling, Zimbabwe would have had a mainstay at the crease to put up a fight.
Sikandar Raza dropped the ball towards cover and set off, hesitated on seeing Misbah attack the ball but carried on. Taylor was struggling amid the confusion and was dismissed via a direct hit. Misbah was in action once again when he underarmed the ball to the keeper Sarfraz who broke the bails before Williams – who was ball-watching – could make his ground. It was a close call but nevertheless, a single that should never have been attempted. It was a period in which Zimbabwe lost four wickets for 21 runs and by the halfway mark, lost six. Malcolm Waller, the only specialist batsman around, played the lone hand with 48 as Pakistan wrapped it up with ten overs to spare.