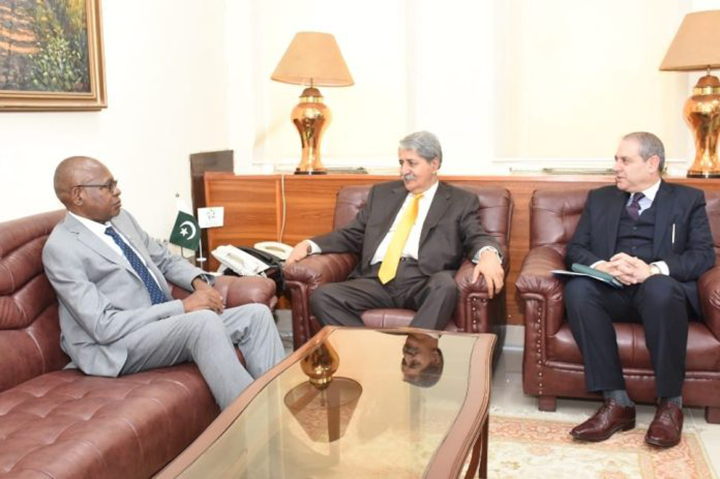 Pakistan has engaged Zimbabwe with the aim to bolster business ties between the two nations ahead of the Pakistan-Africa Trade Development Conference and Single Country Exhibition set for later this year.

Speaking during a meeting with Zimbabwe’s ambassador to China, Lt Gen (Rtd) Martin Chedondo, Pakistan Federal Minister for Commerce and Investments, Syed Naveed Qamar, expressed the need for bilateral engagements as part of solidifying strong economic future for his country and Zimbabwe.

The representatives on the two countries also discussed linkages in the corporate sector with the main focus on agriculture, pharmaceutical and machinery.

Qamar invited Zimbabwe to join the PAK-Africa Trade Conference to be held in Johannesburg, South Africa saying the sub Sahara nation had a role to play in enhancing economic ties at the event.

“As a member of the South African Development Community (SADC), Zimbabwe could play a vital role in the Pakistan-Africa Trade Development Conference and Single Country Exhibition.

“We invite Zimbabwean businesses to play a central role in it (PAK-Africa Trade Conference). We hope Zimbabwe’s business community will actively participate in the exhibition. Which ultimately would step forward in exchanging of business delegations and establishment of joint working groups on trade and trade agreements,” said Qamar.

Ambassador Chedondo, who also covers Pakistan, weighed in saying trade relations between the two countries dated back as far as Zimbabwe’s independence, whilst urging increased interactions between business communities on both sides.

Part of the cordial agreements between Zimbabwe and Pakistan include boosting trade in sectors such as agricultural, mining and machinery.