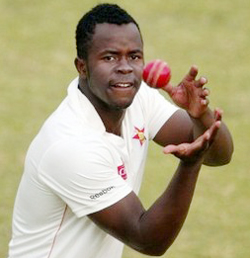 Zim 294/10 | Pak 230/10 | Zim 121/4
THREE late wickets gave Pakistan renewed hope after Zimbabwe played themselves into a strong position on the third day of the second Test at Harare Sports Club on Thursday.
A five-wicket haul by Brian Vitori and a century stand between Tino Mawoyo and Hamilton Masakadza put Zimbabwe on top before both partners and night-watchman Tinashe Panyangara fell in the last three overs of the day.
Zimbabwe were 121 for four at the close, an overall lead of 185 on a wearing pitch which has made stroke play difficult for batsmen of both sides.
Left-arm fast bowler Vitori took five for 61 as Pakistan collapsed to 230 all out, losing their last six wickets for 19 runs and giving Zimbabwe a first innings lead of 64.
Stand-in opening batsman Prosper Utseya was caught at midwicket off Rahat Ali for five when Zimbabwe batted again with regular opener Vusi Sibanda feeling ill.
But Mawoyo and Masakadza added 104 for the second wicket with some of the most impressive batting of the match.

Mawoyo made 58 off 165 balls before he was trapped leg before wicket by left-arm spinner Abdur Rehman shortly before the close.

Masakadza followed up his first innings of 75 with 44 before he too fell leg before, to left-arm fast bowler Rahat Ali.
Rehman, the most impressive of the Pakistan bowlers, claimed a second wicket in the last over of the day when Panyangara was caught at short leg.
Rehman took two for 20 in 15.2 accurate overs.
Earlier, Pakistan were well-placed to overhaul Zimbabwe’s first innings total of 294 until Asad Shafiq was fifth man out shortly before lunch, bowled by Tendai Chatara with the total on 211.
The match swung dramatically in Zimbabwe’s favour after lunch when Younis Khan, the mainstay of their innings, clipped Panyangara to midwicket after making a patient 77 off 223 balls with nine fours.
Rehman was leg before wicket to Panyangara off the next ball and Vitori ripped out the last three batsmen to give Zimbabwe an important lead on a tricky pitch.
Only 48 runs were scored in 28 overs during the morning’s play for the loss of two wickets, while six further wickets fell while 49 runs were scored in 22.5 overs between lunch and tea. The scoring rate picked up slightly after tea as 91 runs were scored off 36.2 overs.Advertisement

Pakistan captain Misbah-ul-Haq made a laboured 33 off 120 balls before he fell victim to the second delivery with the second new ball shortly before the morning drinks break, caught at first slip off Vitori, pushing at a wide ball slanted away from him.
Shafiq was bowled by Chatara for 10 in what was virtually an action replay of his dismissal in the second innings of the first Test, not getting forward to a fairly full delivery which swung in.