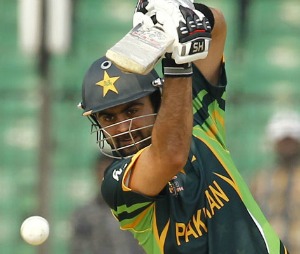 PAKISTAN opener Ahmed Shehzad has been cleared to play in the team`s third World Cup Pool B game against Zimbabwe after suffering an ankle injury, an official said Friday.
The 23-year-old right-hander was sent for an MRI scan after team practice in Brisbane, complaining of pain in his left ankle, but a spokesman said Shehzad will be fit for Sunday`s game.
“Shehzad had tendonitis so we sent him for an MRI which is clear and he will be available for the Zimbabwe match,” the team spokesman told AFP.
Shehzad scored 47 in the opening defeat against India but managed just one in Pakistan`s 150-run thrashing at the hands of the West Indies in Christchurch last Saturday.
Pakistan need a win to bolster their chances of reaching the quarter-finals and are currently bottom of Pool B.
Shehzad was one of eight players fined for breaching a curfew a week before the World Cup started.Advertisement