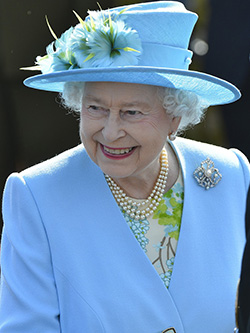 BUCKINGHAM Palace scolded Rupert Murdoch’s top-selling Sun tabloid on Saturday for publishing a previously unknown film from 1933 that appears to show Britain’s Queen Elizabeth performing a Nazi salute as a young girl.
The black-and-white film from the year Adolf Hitler came to power purports to show future British king Edward VIII instructing his nieces, the current monarch Elizabeth, aged about six or seven at the time, and her three-year-old sister, Princess Margaret, how to perform the Nazi salute.
Dancing and smiling with little apparent understanding of the salute’s significance as a sign of obedience to Hitler, the two young girls are encouraged by Edward to briefly perform the raised right-arm gesture in the grounds of Balmoral Castle in Scotland.
The Sun published the story and the 17-second film on its website under the headline “Their Royal Heilnesses”. Edward also raises his arm, as does his sister-in-law, the Queen Mother.
“It is disappointing that film, shot eight decades ago and apparently from Her Majesty’s personal family archive, has been obtained and exploited in this manner,” a Buckingham Palace spokesman said.
The Sun said the original film remained under lock and key but copies of the clip were made several years ago, one of which had been handed to the paper by a source who believed it to be of “massive public interest and historical importance”.
Sun Managing Editor Stig Abell and News Corp, owner of The Sun and the Wall Street Journal, did not immediately respond to requests for further comment.
The Sun, bought by Murdoch in 1969, prides itself on a raucous style that has made it Britain’s best-selling newspaper, though critics charge it with sometimes callous reporting of everything from wars and politics to private tragedies.
In an editorial, The Sun said the images did not reflect badly on the Queen and it had published the images to provide an insight into “the warped prejudices” of Edward, who would later abdicate after just under 11 months as monarch.
Edward renounced the throne in 1936 to marry Wallis Simpson, a twice-divorced American socialite. He was succeeded by his younger brother, George VI, father of Queen Elizabeth.
‘Entirely innocent’
Edward, an opponent of Russia’s Bolshevik rulers who killed Tsar Nicholas II in 1918, visited Germany in 1937 and met Hitler just months after the Luftwaffe bombed the town of Guernica during the Spanish Civil War and Jews had been banned from many professions in Germany.Advertisement

“Edward and a clique of anti-Semitic aristocrats were terrified of a communist revolution stripping them of power and privilege with deadly force, as it had in Russia. Fascism seemed like an answer,” the newspaper said.
“The man who briefly became our King was already a fan of Hitler — and remained so as late as 1970, long after the Holocaust’s horrors were laid bare,” the newspaper said.
Elizabeth, now 89, is widely popular in Britain where she is seen as a figure of stability who rarely expresses emotion or personal opinion in public.
Immediate reaction to the images was mixed. Some Twitter users cast the publication as a stunt aimed at selling more newspapers, while some said it was right to publish.
“Although a little embarrassing for the 89-year-old monarch, it is not going to change anyone’s view of her,” media commentator Roy Greenslade wrote in the Guardian newspaper.
Elizabeth will overtake Queen Victoria as Britain’s longest-reigning monarch in September.
A Buckingham Palace source who spoke on condition of anonymity said the image should be seen in the context of its time and that given her young age, she was “entirely innocent of attaching any meaning to these gestures.
“This is a family playing and momentarily referencing a gesture many would have seen from contemporary news reels,” the source said.
“No one at that time had any sense how it would evolve. To imply anything else is misleading and dishonest.”