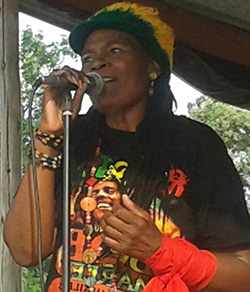 OFTEN female musicians are associated with gospel music or Afro-Jazz but for Patricia Makusha, stage name Tete Pipilo, music knows no gender nor age.
The 54-year-old Smart Family band leader has defied all odds and ventured into the male-dominated world of Sungura music, and she certainly has what it takes to challenge established names such as Alick Macheso, Somandla Ndebele or First Farai.
“I started off playing jazz and jit and some bit of traditional music but realised there were no female musician doing Sungura and I decided to fill that gap” she told NewZimbabwe.com in an exclusive interview recently.
Makusha said although she started music in 2009, she turned to Sungura in 2012 and has one Sungura album to her name which was recorded in 2015.
“In 2012, I did three Sungura songs on my album which was largely jazz-based. I finally recorded a whole Sungura album in 2015,” she said.
Tete Pipilo said the album, titled Pakaipa, had beautiful songs and is the one which raised her bar.
She said she was now working on a new 7-track album titled Hombarume, which would be launched “any time this winter”.
If her performance at a recent fund-raising show for Tedious Matsito is anything to go by, the album is set to take the Sungura music scene by storm.

Tete Pipilo said music comes naturally to her and she faced no difficulties playing Sungura.
“People thought I would struggle with Sungura because I am a woman, but I do it with a lot of ease,” she said.
She said while people think that, at 54, she is too old to make an impact, she felt very energetic and was prepared to face her challenges head on.
Tete Pipilo, who lives with her 10-member band at her house in Chitungwiza, said female musicians were often looked down upon, adding she would work hard to prove to the world that women were equally capable.
The mother of three said musicians should learn to help each other instead of competing.
She said she was inspired by female artists such as the late Brenda Fassie, Shingisai Siluma, and Tina Turner.
Her daughter is also in the music industry and sings ZimDancehall.Advertisement