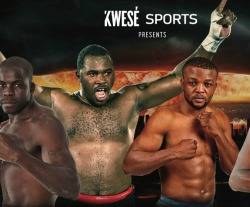 NEW pay-per-view broadcaster Kwese TV which recently entered the Zimbabwean market is set to stage a boxing event, Pan-African Boxing Explosion, at the Rainbow Towers Conference Centre in Harare.
Kwese is owned by Strive Masiyiwa, the mobile network Econet guru.
The event will see some boxers from all over Africa battling for titles across all weight classes. It is set for Friday the 25th of August.
There will be eight action packed match ups, featuring Zimbabwean Cruiserweight Sting Gonarenda and Heavyweight, Elvis Moyo in two WBF Africa Championship bouts.
Some of the fights will be between Elvis and Bernard Adie (Kenya) for the WBF title, Lawrence Moyo against Wilson Masamba (Malawi), for the light welterweight title.
Nicola Mutonhora will battle it out with Alick Mweda (Malawi) in the non-title super middleweight and Felix Venganayi will fight George Otieno of Kenya for the lightweight title.
Another notable combatant on the bill is local favourite Tinashe Mwadziwana who said the event is shaping up to be something special.
“It has been a while since Zimbabwean boxing fans have witnessed an event of this magnitude; the response and excitement is growing daily,” said Tinashe.
Tickets are on sale for the VIP section at US$100 while the cheapest ticket is US$15.
The event will be broadcast live in 38 countries on Kwesé Sports 1, Kwesé Free Sports, Soweto TV (Channel 251) and streamed globally on the Kwesé mobile app.
Harare Pan African Boxing Explosion is promoted by Kalakoda Promotions in association with Kwesé Sport and other local partners AB Communications, Rainbow Towers and ZiFM Stereo.
Advertisement