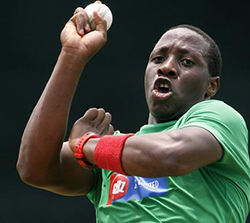 ZIMBABWE cricket coach Stephen Mangongo has denied excessive heavy handedness in the suspension of Tinashe Panyangara from the national squad.
Panyangara will not feature in the remainder of the triangular series against Australia and South Africa after what Zimbabwe Cricket’s press release described as “indiscipline” and what Mangongo explained as being “unacceptable by any stretch of the imagination.”
Panyangara’s crime was sharing a video with his team-mates via WhatsApp of Mitchell Johnson battering England with a barrage of short balls.
“In any sport, to post a video of the opposition annihilating another team will not be tolerated. I was perplexed that a senior bowler behaved in such a childish manner,” Mangongo told ESPNcricinfo. “On the eve of such a serious match, you don’t do that.”
Zimbabwe’s batsmen have been concerned with the reputation of opposition bowlers from the start of their incoming tours this winter.
Some were concerned about whether Dale Steyn would play for South Africa during the one-off Test. They had heard that the speedster may be rested and were hopeful they would not have face him. Steyn played and claimed a five-for but Zimbabwe’s batsmen acquitted themselves fairly well against him.
However, during the opening game of the tri-series on Monday, Zimbabwe’s batsmen were hesitant to put bat to ball if it came out of Johnson’s hand.
Not making an example
Johnson conceded seven runs in six overs along with striking Elton Chigumbura on the helmet in the dying stages of the matches.
Mangongo was concerned Panyangara’s sharing of the video contributed to Zimbabwe’s apprehension.
The coach said he was “not making an example of Panyangara, just taking action where it needed to be taken” and that Panyangara had “not been banned. After the tri-series, he will be back and that’s it.”
Zimbabwe’s next assignment is against Bangladesh in October and Panyangara is currently training with the A side in preparation for that.
Before that, Zimbabwe have at least three more matches in the ongoing series but will have to do without Panyangara, their most experienced frontline bowler.
But Mangongo did not see Panyangara’s unavailability as a decisive factor.
“We have eight other bowlers so I am not worried about who comes in or who goes out; we have heavy competition in the bowling department,” he said.Advertisement

Panyangara options
“There are not vast differences between the bowlers we have. We are not going to be missing Dale Steyn. Tinashe conceded more runs in Harare than he did in Bulawayo.”
While some of the bowlers Mangongo referred to are already in the XI, the other options to replace Panyangara are uncapped Cuthburt Musoko, teenager Luke Jongwe, Neville Madziva, who made his debut last week or Shingi Masakadza and Brian Vitori, who are both struggling for form.
Even that reality does not bother Mangongo.
“We are a work in progress and we are playing against the big operators in world cricket. We are determined to improve so that is what we are working on,” he said. “And we are working very hard.”
Zimbabwe had a rest day on Tuesday but four members of the squad reported to practice, which Mangongo took as a sign of their commitment.
“Brendan Taylor was at the head of that group so that was pleasing to see,” Mangongo said. “Everybody is working hard and trying to improve. We cannot fold our arms and do nothing; if we do that, we are not doing our jobs.”
Mangongo’s sunshine outlook is overshadowed by the mood in the team camp. Insiders have revealed morale is floundering and the unhappiness with Mangongo’s strict methods growing.
Morale floundering
“He is abusing his power beyond comprehension,” an insider said. “There is every chance the players will protest at some stage but for now, they are just waiting to see whether anything will change.”
Apart from Panyangara’s suspension, Mangongo has also enforced strict disciplinary measures including a curfew and shown no mercy to underperforming players, even stalwarts.
Taylor was dropped for the final match against South Africa after scoring just 20 runs in the previous two games while Vusi Sibanda has been put on the sidelines twice in the last month.
“Nobody is safe” is Mangongo’s mantra and this time, it was Panyangara’s turn to learn that.