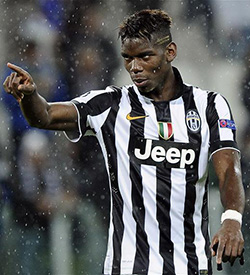 Gareth Bale is still definitely coming to Manchester, according to Sunday’s papers – but he could end up wearing blue instead of red; plus the rest of the day’s big stories.
Manchester City fighting United for Gareth Bale
The Sun on Sunday reports that Gareth Bale’s move to Manchester is going full steam ahead – except that he could end up wearing City’s sky blue shirt instead of United’s red. “City want a world-class attacking midfielder to help win back the title,” the paper reports. “And they will not get left behind United if Real Madrid star Bale comes on to the market. City owner Sheikh Mansour has given the green light — and they are also in the hunt for Juventus star Paul Pogba, 22, as they look to splash out in this summer’s transfer window.”
Chelsea to move for Yaya Toure

The Sunday Express reports that Chelsea will make a “shock summer swoop” for Manchester City midfield Yaya Toure. “The 32-year-old Ivorian who according to his agent Dimitri Seluk is ’90 per cent certain’ to leave the Etihad in the summer has attracted interest from his former City manager Roberto Mancini at Inter Milan, Champions League finalists Juventus and Paris Saint-Germain,” the paper reports. “But Seluk also revealed that he has been contacted by a Premier League club. Sunday Express Sport can reveal that club is Chelsea.” Jose Mourinho apparently, “still believes that Toure has the energy and appetite for the Premier League even if things have gone stale in the past 12 months.”
David de Gea to decide future at family summit
The Star on Sunday reports that United’s goalkeeper is set to make up his mind about a move to Real Madrid at the end of the season, by sitting down with his nearest and dearest back at the family home in the Spanish capital. “De Gea, 24, has a tight-knit family in Spain whose opinion he respects and he will ask them for their views before coming to a decision,” the paper reports. “The meeting – which is expected to take place within the next fortnight – will include his Madrid-based girlfriend Edurne Garcia.” The Star adds that De Gea could well yet decide to stay, since he is happy in Manchester – not least because he, ” a bond with United’s fans and has not forgotten how they backed him when his Old Trafford career got off to a rocky start.”Advertisement

The Mail on Sunday claims that Manchester United’s Argentine winger Angel Di Maria has been told he must shape up or ship out. The paper says that “Van Gaal has cast doubt on whether £60 million record signing Angel di Maria can turn around his disastrous spell at Old Trafford… In a clear sign that patience is running out for the Premier League’s most expensive player, Van Gaal insisted Di Maria must work a lot harder to alter his game.”
The paper cites the manager saying that he needs Di Maria to change, but that it is a difficult thing because, “it’s very important that you want it in your head… Players have to adapt to the team philosophy and Di Maria has to do that.” This, the Mail insists, is a clear sign that United are serious about “cutting their losses on the 27-year-old Argentinian, who hasn’t started the club’s last eight matches.”
Manchester United’s top priority isn’t Bale – it’s Pogba
The Observer reports that Louis van Gaal’s £150m summer spending spree does not revolve around Gareth Bale, but around Juventus’s Paul Pogba – and keeping David De Gea. “Van Gaal also wishes to strengthen by adding a central defender – Borussia Dortmund’s Mats Hummels is first-choice – and a striker, with Harry Kane of Tottenham Hotspur potentially on the radar,” the paper reports.
“But given United already have the centre-backs Phil Jones, Marcos Rojo, Jonny Evans and Chris Smalling, plus Wayne Rooney, Robin van Persie, James Wilson and Radamel Falcao in attack, Van Gaal’s prime concerns are to find an elite operator to run the midfield and to answer the question of who is to be the United No1…. The Dutchman’s preferred tactical shape is 4-3-3 and if Pogba can be landed he would go straight into the midfield trident.”