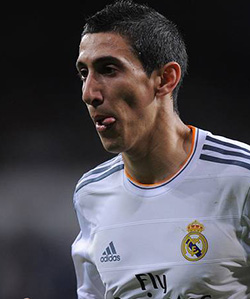 Nicklas Bendtner
Bundesliga side Frankfurt have pulled out of negotiations to sign Arsenal striker Nicklas Bendtner after the Dane requested a staggering £30,000 bonus for every pointthe club won. On top of a £40,000 basic wage, Bendtner could have trousered a massive £130,000 every time Frankfurt won a match. Unsurprisingly, the Mirror reports that the Germans have withdrawn from talks. Or rather they report a story that first appeared in Danish newspaper BT (which we’re now telling you third hand).
Angel di Maria
Louis van Gaal could land Real Madrid star Angel di Maria after the Real Madrid winger’s move to Paris Saint-Germain stalled. The transfer looked a done deal, but with PSG fretting over Financial Fair Play, the door has reopened for United to nab the £45m-rated Argentine, the Sun reports. When asked about the transfer, PSG boss Laurent Blanc said nothing was done, adding: “I’ll leave you to speculate.” And the tabloids need no second invitation to do just that.
Calum Chambers
Ronald Koeman is set to lose another star from his Southampton squad, with Arsenal closing in on a £12m move for right-back Calum Chambers, the Daily Mail reports. Arsene Wenger has reportedly been impressed by the 19-year-old, whom he wants to compete for a first-team place with Mathieu Debuchy.
Bacary Sagna has already left for Manchester City while Carl Jenkinson will be allowed to go, with West Ham reportedly interested. Southampton have already sold Rickie Lambert, Adam Lallana and Luke Shaw this summer, while defender Dejan Lovren and midfielder Morgan Schneiderlin are also in demand.
Dejan Lovren
One man seemingly certain to leave St Mary’s is Dejan Lovren, who is on the brink of becoming the most expensive defender in Liverpool’s history. It is widely reported that Lovren will switch Southampton for Merseyside in a £20m deal, just a year after joining for just £8.5m. He is set for his medical on Saturday. He will be the third Southampton player to join Liverpool this summer after Lambert and Lallana.Advertisement