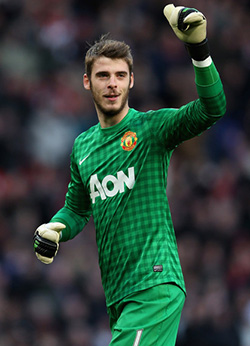 United keen to ward off Real interest in De Gea: Manchester United hope to ward off interest in David De Gea from Real Madrid by handing the goalkeeper a bumper new deal. The Daily Mirror reports that United chiefs are set to more than double the Spaniard’s wages to £120,000-per-week and offer him a five-year deal in a bid to keep him out of Madrid’s clutches. Reports from Spain two days ago claimed that De Gea’s form has alerted Real, who are starting to prepare a £25 million bid to take the 23-year-old back to Spain. United hope to tie De Gea down to a new deal before Christmas, as they do not want him to enter the final 18 months of his current contract without a new deal having been penned.
Villa facing fight to hang on to Vlaar: Aston Villa will have to double Ron Vlaar’s wages to have any chance of hanging onto the defender, according to the Daily Star. Manchester United currently head the battle to sign the Netherlands international, with a host of other clubs also keen. The paper claims the 29-year-old’s future at Villa Park is unclear given that he is out of contract in the summer. As such, the former Feyenoord player “holds all the aces”, although Villa’s proposed £50,000-a-week package is probably not going to be enough to tempt him to stay.
Arsenal to bid for United target: Meanwhile, United stand to face competition in their bid for another Dutch defensive target, Virgil van Dijk. The Daily Star reports that Arsenal are set to offer Celtic £8m for the 23-year-old, who was watched by Gunners staff in the Hoops’ Europa League clash with Dinamo Zagreb two weeks ago. The paper claims Arsenal and United will now go head-to-head for Van Dijk in January.
Liverpool mull money-spinning naming rights deal: Liverpool are considering selling the naming rights for the new main stand at Anfield to finance the huge cost of the stadium redevelopment. According to The Guardian, the club are exploring the idea but have ruled out the possibility that the stadium as a whole could be renamed.

Townsend voted worst co-commentator on TV: Andy Townsend has stormed to victory in an online poll conducted by The Independent to determine the worst football co-commentator. The ITV man scooped a majority 37 per cent of the vote for his “constant stream of generic football clichés”. Coming in second was BT Sport’s Michael Owen (23 per cent) and third was the BBC’s Mark Lawrenson (13 per cent). Unsurprisingly, Gary Neville garnered just two per cent to cement his position as the country’s top pundit, while Alan Smith had 3 per cent and Niall Quinn had 4. Perhaps surprisingly, Neville’s brother Phil, who had been widely criticised for his early performances behind the microphone, came in fourth with just 10 per cent of the more than 2,500 people who registered to vote.Advertisement