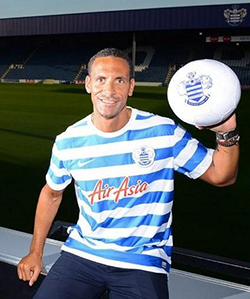 MATA offered as bait in Strootman deal: Juan Mata’s time at Manchester United is set to be relatively brief, reports the Sunday People.
Louis van Gaal is set to firm up his interest in Roma midfielder Kevin Strootman with a January bid and is set to offer Mata as part of the deal.
Roma are adamant that the Dutch star is not for sale but United feel that a part-exchange deal involving the Spaniard could sway the deal.
Mata, who became United’s record signing in January, has fallen down the pecking order following a summer of transfer upheaval at United.

Ronaldo ready for shock move to Manchester City: Cristiano Ronaldo is determined to leave Real Madrid at the end of the season and could end up at Manchester City, reports the Daily Express. The report suggests that Manchester United manager Louis van Gaal may believe that the £60 million that Real Madrid will demand could be better spent elsewhere. With United unwilling to meet such a fee, Manchester City or PSG may step into the void and make an offer for the world player of the year.
Ronaldo wants a staggering £500,000-a-week: The Daily Mail report that Cristiano Ronaldo will demand £500,000-a-week from either United or Chelsea to return to the Premier League. Ronaldo prefers a move back to Old Trafford but may end up at Chelsea due to his agent Jorge Mendes’s close links to both Jose Mourinho and Roman Abramovich. The reason for the £500k? Well United are paying Radamel Falcao £390,000-a-week.
Tottenham return for Schneiderlin: Tottenham Hotspur are set to test Southampton’s resolve with a fourth bid for Morgan Schneiderlin, reports the Sunday Mirror. Tottenham had three bids, the highest of which was £20m, rejected for the France star during the summer transfer window but are still keen on the 24-year-old.
Van Gaal tells Valencia to take English lessons: Manchester United manager Louis Van Gaal has ordered Antonio Valencia to learn English – eight years after the Ecuador international arrived in the country.
Advertisement

Valencia has been in the North West since 2006 when he joined Wigan Athletic from Villarreal before then completing a £16m move to Manchester United in 2009.
However, new manager Van Gaal, who can speak four languages, is not impressed with the standard of the wide player’s English according to the Daily Mail. The paper says that Valencia has been told to take English lessons with the rest of the squad’s Spanish speakers.
United have added four Spanish speakers to their squad this summer – with Argentines Angel Di Maria and Marcos Rojo, Colombia’s Radamel Falcao and Spain’s Ander Herrera joining the club. All four are taking English lessons, as is goalkeeper David De Gea, with Valencia ordered to join them.
Juan Mata is the only Spanish player at the club deemed to have good enough English that he does not need the lessons. The Mail says, Di Maria and Rojo ‘barely speak a word’ of English and will join a beginner’s class. Falcao and Herrera are to join De Gea’s intermediate class in the next few months, while Valencia is getting one-on-one tuition.
Ferdinand – Terry an idiot but probably not racist: Ferdinand and Terry became estranged after the Blues skipper used racist language towards Anton Ferdinand during a Premier League match between QPR and Chelsea in November 2011. Terry was banned for four matches by the Football Association in relation to the incident, having been cleared of any wrongdoing in an earlier court case.
“For me, the biggest idiot will always be John Terry,” said Ferdinand in his autobiography #2sides which is being serialised in the Sun on Sunday. “As England captain and my centre-back partner he could have saved everyone a lot of pain by admitting immediately he used the word in the heat of the moment, but was no racist. I think that’s probably what happened and what the truth is. Anton and I would’ve accepted that.”
The FA found that Terry had called Anton a “f****** black c***” when Chelsea faced QPR at Loftus Road in October 2011.
“He tried to run away from what he had done.
“I’ve never actually spoken to John about the case. I no longer talk to him, but even three years later I find it impossible to forgive or forget the pain he put us through.”
The case also resulted in the loss of a childhood friend, as Ferdinand revealed that he no longer speaks to Ashley Cole after the then Chelsea left back was called as a defence witness in the criminal case that saw Terry found not guilty.
“Ashley Cole had long been a friend of mine. We’ve known each other since we were kids. But for me it ended the day he decided to go to court in support of John Terry,” said Rio.
“Anton rang me and my head nearly blew off. He was betraying Anton, who he’d also known for years.”
The fall out of from the incident had further ramifications adds Ferdinand – with his mother ending up in hospital with a stress related illness after her house was vandalised and she was sent bullets in the post.
“My mum had her windows smashed and bullets put through her door, and ended up in hospital because of the stress,” said the QPR defender.