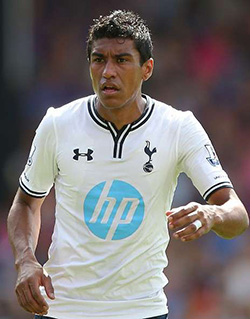 ARSENAL target Cavani: Arsenal could be free to launch a £50 million bid for Paris Saint-Germain striker Edinson Cavani after his boss Laurent Blanc lost patience with the Uruguayan forward, according to the Express.
With Zlatan Ibrahimovic preferred as the French champions’ attacking focal point, Cavani has reportedly fallen out with Blanc and could be open to a switch abroad – despite the pair only reconciling from another disagreement at the start of the season.
Inter Milan eye Paulinho: Inter Milan are interested in signing out-of-favour Tottenham midfielder Paulinho on loan in January, as reported by the Mirror, with the Serie A giants potentially having the option of making it a permanent deal for £12 million.
Spurs are set to be busy in the January transfer window and would benefit from freeing up their wage bill to target young England star Saido Berahino of West Brom.
Paulinho has barely featured under Spurs boss Mauricio Pochettino, despite playing in all but one of Brazil’s matches at the World Cup
Manchester City after Mandzukic: Manchester City boss Manuel Pellegrini is hoping to ease his side’s injury crisis in attack by signing £25 million man Mario Mandzukic from Atletico Madrid, the Daily Star reports.

City were forced to field James Milner in a ‘false nine’ role against Crystal Palace last weekend, with Sergio Aguero, Edin Dzeko and Stevan Jovetic all sidelined.
City are three points behind Premier League leaders Chelsea ahead of the busy festive programme.
Inter Milan has been hustling for an offensive option and the most touted name so far has been that of Atletico Madrid’s Alessio Cerci.
However, the discussion switched Wednesday to Lucas Podolski, who might be open to joining the Nerazzurri on loan.

According to Corriere dello Sport, an agreement for the German to move to San Siro on a free loan transfer has already been reached.
The only details left to iron out relate to whether the clause for the purchase at the end of the loan will be compulsory or optional.Advertisement

In the case of the former, Inter are not willing to go beyond €6 million (£4.7 million), while in the latter, they could bring their commitment up to €8m (£6.3 million). Podolski may prove to be an alternative to Cerci in case the latter is swooped by Milan.
Roma eye Aston Villa’s Christian Benteke: With striker Mattia Destro’s departure again up for discussion, Roma are reportedly looking at Christian Benteke to replace him.
Rumours that the Giallorossi’s young Italian may be departing for either Milan or Arsenal are again in the air heading into the January market.

Il Messaggero reports that the relationship between the player and his current club has reached the final stages, with his representatives meeting with Walter Sabatini this week to determine a solution.
According to the same publication, the first choice for a replacement going forward would be 24-year-old Benteke, who has a contract with Aston Villa until 2017.
His potential arrival remains contingent on the departure of Destro, though.
Maurinho rules out Messi: Chelsea boss Jose Mourinho says it will be “impossible” for the Premier League leaders to sign Barcelona star Lionel Messi.
According to reports, the Catalan giants have valued 27-year-old Messi at an eye-watering £200m and Mourinho’s side along with Manchester City have been linked with him.
But Mourinho insists that the Stamford Bridge outfit won’t be able to land the Argentine star due to recent FFP regulations brought in by UEFA.
“No I have no chance of that,” Mourinho told BT Sport.
“Because at this moment there is financial fair play and with the financial fair play we have to follow certain rules, certain numbers and we obviously have no conditions to buy, as you say a ‘super amazing player’ paid with ‘super amazing numbers’ that Chelsea at this moment we cannot do.”
Mourinho’s comments come just as midfielder Cesc Fabregas revealed it would be a dream to link up again with his former Barcelona team-mate.
“I wish! Why not? I’d love that to happen,” he said. “I’d be all for it. As a Barca man, I believe that Messi deserves to retire at Barca for all that he has given the club.”