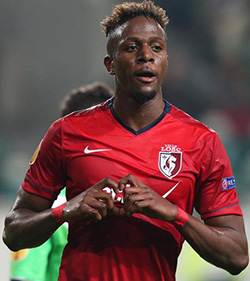 CITY CLOSE ON BONY SWOOP: Manchester City are eyeing Swansea City’s Wilfried Bony as the answer to their problems up front, the Sunday Mirror. Injuries to Sergio Aguero, Edin Dzeko and Stevan Jovetic have left Manuel Pellegrini short of options, leading to James Milner playing as a ‘false nine’. Bony is seen as the ideal solution with City making an assault on the top of the table, but would cost a hefty £25m – puzzlingly, the Mirror claims that is £4m MORE than his release clause, but does not explain why City would voluntarily pay more than they have to.
ER, NO, THEY WANT BENTEKE INSTEAD: The Sun on Sunday claims City’s main target is Aston Villa’s Christian Benteke, not Bony. The reasoning is that Bony goes on Africa Cup of Nations duty with Ivory Coast this month, so will not be available when he is most needed – during Sergio Aguero’s absence through injury. The Sun also points out that City will have to let a foreign player go if a striker arrives, as they are at their limit of 17 non-homegrown players.
ACTUALLY, THEY WANT ROSS BARKLEY: Enter the Mail on Sunday, which reckons City will sign Ross Barkley from Everton for a fee in excess of £45m. Everton boss Roberto Martinez is under increasing pressure, and the sale of Barkley would fund a winter spending spree to help reignite the Toffees’ faltering campaign. Barkley would offer City drive and dynamism in a central attacking midfield role, where they have become increasingly reliant on Frank Lampard.
CABAYE TO RETURN TO NEWCASTLE: And interesting story in the Sunday Mirror suggests that Yohan Cabaye could be back at Newcastle just a year after leaving for Paris Saint-Germain. Cabaye has struggled to assert himself in the PSG side, and with the French champions desperate land Moussa Sissoko, they could offer the former Newcastle favourite in part-exchange. Sissoko is valued at £20m by Newcastle – the same price PSG paid for Cabaye last January.
FALCAO FOR POGBA: Reports suggest that if Juventus were to sell Paul Pogba, they would look to replace him with Radamel Falcao, currently on loan at Manchester United.
Although they have repeatedly stated they are unwilling to part with Pogba, who is under contract until June 2019, Paris Saint-Germain, Manchester United, Real Madrid, Chelsea and Manchester City are all interested in signing him and a massive bid might be too tempting to refuse.Advertisement